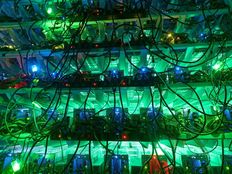 Crypto has long faced criticism from environmentalists and politicians due to the amount of energy it consumes.

Efforts are being made to change crypto mining’s reputation for the better. According to the New York Times, all five of the largest publicly traded crypto mining companies are either building or already operating plants powered by renewable energy.

When China banned crypto mining, many mining operations relocated to the United States. After Elon Musk criticized the industry for its fossil fuel use, a trade group formed to address climate issues. Much of the challenge comes in the amount of energy needed to generate bitcoin, which has soared since the cryptocurrency’s early years. In China, miners could rely on green energy from relatively cheap hydropower. The U.S. grid is more dependent on traditional energy sources, and some renewable sources present challenges. Solar, for example, relies on the sun. “What a miner is going to do if they want to maximize the profit is put their machine wherever it can run the entire day,” Alex de Vries, author of a bitcoin study in the journal Joule, said.

When Tesla stopped accepting cryptocurrency as payments, it sent a reaction throughout the mining industry. “Everyone I talk to now is talking about carbon neutrality,” said Paul Prager, the chief executive of TeraWulf. “The language has absolutely changed.”

Could Bitcoin Mining Be Good for the U.S. Grid?

Texas Representative Pete Sessions tweeted on Tuesday that “Bitcoin Mining will play a critical role in rebuilding energy independence in the USA.” Sessions’ view comes from a compilation of research that suggests that innovations from BTC mining could have applications in industrial energy consumption and production. Researcher Joshua D. Rhodes said in a paper, “As grids move towards incorporating higher levels of intermittent resources, such as wind and solar, flexible demand will play an ever more important role in keeping the electrical grid system stable.”

As cryptocurrency moves closer and closer to widespread, mainstream acceptance, miners will look for ways to contribute to a net-zero emissions world. Investors can get exposure to many of these firms through the Vaneck Digital Assets Mining ETF (DAM ).