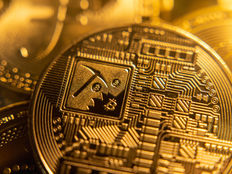 Back in June of 2021, China banned cryptomining, citing its environmental impact.

With the country pursuing carbon neutrality, China decided that the carbon footprint from cryptomining was too much of an obstacle. This led to an exodus of miners to the U.S., Iran, and other countries. When this happened, Bitcoin hashrates plummeted to as low as 61 exahashes per second. By comparison, April 2021’s hashrate was over 190.

Hashrate is the raw amount of computational power being utilized by miners toward the creation of bitcoin tokens and verifications of transactions on the Bitcoin network. Lower hashrates make for a less secure and productive network.

Glassnode data shows that hashrates recently spiked to 201 exahashes on January 1st, surpassing April 2021’s highs and demonstrating the resiliency of the crypto network. In a tweet, Casa Wallet founder and bitcoin developer Jameson Lopp said, “Weathering and completely recovering from a 50%+ drop due to a mining ban by the country with the most hash power was a major milestone for network resilience.”

Overall, Bitcoin managed to increase its hashrate from 2021 in 2022 despite losing access to mining in China, which had been a central region due to its favorable environmental conditions and breadth of expertise.

Crypto Is Ready to Dominate in 2022

With crypto showing tremendous resilience and becoming an increasingly mainstream investment option, investors have a number of ways to get exposure to the sector. The hashrate recovery speaks particularly well of the strength in the crypto equities space.

Funds like the VanEck Digital Transformation ETF (DAPP C+) deal directly in the crypto equity space by focusing on the firms like Coinbase (COIN) and miners like HUT 8 (HUT). Bitcoin is a volatile asset, and there are numerous alternative currencies available. The crypto equity space is well-positioned to remain strong regardless of which currency becomes dominant.