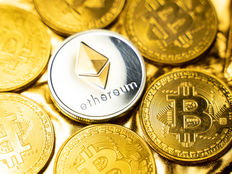 The two leading cryptocurrencies are often mentioned alongside one another, particularly when it comes to new investors looking to build a digital currency portfolio. Bitcoin exposure is valued for its use as a store of value, while ethereum, noted by its native currency ether, is lauded for its use case as a blockchain ecosystem that can house other crypto projects.

However, when it came to looking strictly at mining revenue, it was ethereum that took in the most money in November. A recent ban of cryptocurrency miners by China apparently didn’t stop the revenue from flowing freely.

The disparity in the two top cryptocurrencies didn’t stop at just mining activities. Ether was also able to oust bitcoin this year in terms of price increases — ether is up almost 500% versus bitcoin’s gain of over 70%.

Both cryptocurrencies reached all-time highs just before both plummeted after the Thanksgiving holiday. A flight to safety from the Omicron variant may have spurred an exit from volatile assets like cryptocurrencies.

Still, the volatility seen is not as bad as previous years.

“Data reveals that a modest bearish trend occurred on Dec. 3 and 4 as the 8-hour funding rate went below zero,” a FX Street article explains. “A negative funding rate shows that shorts (seller) were the ones paying the fees, but the movement faded as soon as BTC and ETH prices bounced 15% from their lows.”

“The above data might not sound encouraging, but considering that Bitcoin suffered considerable losses this week, the overall market structure held nicely,” the article says.

Nonetheless, it’s been a bullish year thus far for cryptocurrencies in general. As inflation continues to rise and the Federal Reserve starts to raise interest rates, cryptocurrencies will remain in the conversation as a viable inflation hedge despite the recent year-end weakness.

For investors looking to get into the crypto space, there are exchange traded funds (ETFs) that offer indirect exposure, like blockchain-focused funds. For investors who want more, there are bitcoin futures funds that play off bullishness in future price increases.

Another option is investing via a trust that holds and manages the cryptocurrency, like the Valkyrie Bitcoin Trust. Professionally managed by seasoned asset managers, BTCV invests exclusively in bitcoin and offers investors a secured, cost-efficient, and effective way to access bitcoin.