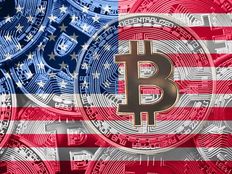 Bitcoin and cryptocurrencies have been in the spotlight as of late, especially amid Russia’s invasion of Ukraine. As such, bulls are back in full force with bold price predictions.

Anthony Scaramucci, who was former U.S. president Donald Trump’s White House director of communications and who launched a bitcoin fund, sees bitcoin reaching $100,000 in two years. Furthermore, Scaramucci is eyeing the $500,000 mark as the pinnacle of the leading cryptocurrency’s value.

It will take some time, however. Many crypto pundits believe we are still in the nascent stages of digital asset growth. “I think bitcoin will have 100 million-plus wallets and it could be an inflation hedge but that’s a good five to eight years away,” said Scaramucci in Magnifi Media. “It would be a mistake to be under-invested or not invested in cryptocurrency.”

In the meantime, bitcoin’s price continues to exhibit the same volatility that the major stock market indexes are seeing. At one point during the month of February, bitcoin was up about 16% before Russia’s invasion of Ukraine dumped a large bucket of volatility into the crypto markets.

Bitcoin did touch past the $40,000 mark before succumbing to more selling pressure. It’s down about 9% this month, but has found some recent support close to the $40,000 price.

As mentioned, the crypto markets are still in their nascent stage as an asset. As such, more market volatility could come often, but it’s par for the course — whether that course results in six-figure prices is anybody’s guess.

“This is early adopting technology,” Scaramucci said. “This will be very volatile. There’ll be periods of time where bitcoin will crash, down 50%-plus. But if you’re willing to zoom out and look at the long-term chart and look at the adoption story, could bitcoin get to $500,000 a coin? I believe it will.”

Investors who are feeling bullish about bitcoin can look at the ProShares Bitcoin ETF (BITO ). While crypto purists may be skeptical about a futures ETF, it can work for investors looking for alternate exposure.

As opposed to directly investing in the cryptocurrency itself, another way to get alternate exposure to bitcoin is to play its future price increases. As such, ETF investors may want to play on this bullish notion with BITO.