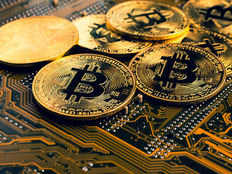 Is Crypto's Chance to Be Digital Gold Finally Here?

Early last week, bitcoin’s 60-day correlation to the S&P 500 reached an all-time high. On Monday, its price skyrocketed 17% while the S&P finished slightly down. This could be a sign that cryptocurrencies are finally behaving like digital safe haven assets. The cryptocurrency space, which had a rough start to the year, could be worth a second look for investors seeking to hedge against geopolitical risk. One place to start could be the Invesco Alerian Galaxy Crypto Economy ETF (SATO ).

The trend of decoupled correlation has continued, with bitcoin up 5% yesterday while blue-chip and tech stocks were down. This trend is still early in development, but it appears that shutting Russia out of the SWIFT global financial system and the generally instability of war has pushed cryptocurrencies into behaving more like safe haven assets and untethered them from tech performance.

“The Ukraine-Russia situation has caused significant financial upheaval and individuals, businesses and indeed government agencies – not just in the region but globally – are looking for alternatives to traditional systems,” said deVere Group’s Nigel Green, noting the increasing financial chaos within Russia that’s affecting everyday citizens. “As banks close, ATMs run out of money, threats of personal savings being taken to pay for war, and the major international payments system SWIFT is weaponized, amongst other factors, the case for a viable, decentralized, borderless, tamper-proof, un-confiscatable monetary system has been laid bare.”

Another interesting factor in bitcoin’s recent rally is that, according to Glassnode, the bulk of bitcoin purchases over the last few days have come from small retail investors who own less than one unit of the currency instead of larger investors, suggesting that this rally is driven by retail buyers and not institutions.

Western businesses and institutions have been pressured to sever Russia’s access to services. Giants such as Apple have complied. “The strategy has to be to raise the price as high as possible, and most importantly, to just deplete Vladimir Putin of resources,” international asset manager Bill Browder said to Yahoo!Finance. “So that this war becomes so expensive, and he just doesn’t have the money.”

One side effect of this strategy is that it spills over into everyday citizens, who must navigate crashing ruble value, sanctions, and an invasion they may not support. Bitcoin enthusiast Anthony Pompliano said in a newsletter that “Ultimately, we are watching the divergence of two financial systems. The legacy infrastructure is built and run by a group of financial firms who are susceptible to the whims of their governments. The new infrastructure is built on open-source software that is run by no single individual or organization. The decentralized nature leads to a different outcome in these situations.”