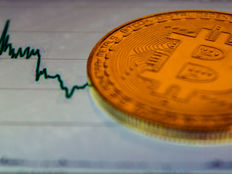 It's Not Too Late for Bitcoin Exposure, Say Strategists

With bitcoin’s price flirting with the $45,000 price range again, it might seem that prospective investors would feel priced out of the leading cryptocurrency, but Wells Fargo strategists beg to differ.

The priced-out position was further substantiated last year when bitcoin’s price reached an all-time high of $69,000 last November. Even in the $40,000 range, it’s still relatively expensive, but not too late to buy based on a Wells Fargo report.

“We understand the ‘too late to invest’ argument but do not subscribe to it,” the report says. “We believe that focusing too much on past performance, especially with cryptocurrencies, can be misleading to new investors. First, performance numbers are skewed because most cryptocurrencies evolved from virtually zero. The earliest years were highly speculative, and it was common to see individual cryptocurrencies launched at prices less than $1. Using bitcoin as an example again, its first real-world transaction did not occur until May 2010, 16 months after its creation, and it valued 1 bitcoin at roughly $0.004. Bitcoin did not cross $1 until February 2011.”

“Second, cryptocurrencies are still a relatively young investment space. The vast majority are, in fact, less than five years old,” the report adds. “Even the oldest cryptocurrencies have much maturing to do. For example, bitcoin is the oldest and arguably one of the least volatile cryptocurrencies, but it is still roughly four times more volatile than gold (Chart 2, dashed orange line) and a basket of global equities (Chart 2, dotted purple line).”

Buying one bitcoin may seem like an expensive proposition to investors, but there are other ways to obtain exposure to the leading cryptocurrency for portfolio diversification. One way is via bitcoin futures and the ProShares Bitcoin ETF (BITO ).

BITO certainly played a large role in catapulting bitcoin to its November all-time high last year with it becoming the first U.S. exchange traded fund (ETF) to focus on the leading cryptocurrency. While crypto purists may be skeptical about a futures ETF, it can work for investors looking for alternate exposure.