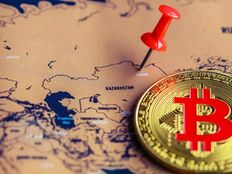 The status quo of bitcoin mining has been upended since China banned the practice in 2021. This benefited both the U.S. and Kazakhstan, the latter of which become the world’s second-biggest bitcoin production base. However, more change is on the horizon.

Civil unrest and frequent blackouts and government throttling is threatening to push Kazakhstan’s nascent crypto industry out, with some government officials blaming a spike in energy demand on the miners.

“We went from hero to zero,” said Denis Rusinovich, co-founder of the industry lobby Cryptocurrency Mining Group (CMG), who has been involved in the mining industry in Kazakhstan since 2017. As energy demand spiked, the government issued taxes on miners and began throttling their power supply.

Some experts put the blame for the demand spike on crumbling infrastructure and corruption, rather than mining. Aset Nauryzbayev, an economist and former chairman of KEGOC’s board, told Rest of World, “It is an omission by the Energy Ministry, which has failed to foresee the problems in the country’s power engineering sector and build new capacities. It now needs to add an additional 2–3 gigawatts of power capacity.”

Many of the country’s largest mining firms have fled. BitFuFu announced that due to “unstable local power supply," its plans to move 3,000 mining machines into the country were being scrapped in favor of a move to a larger facility in Ohio.

In a big win for the crypto industry in Europe, 32 members of the European Parliament voted against a proposed de-facto ban on bitcoin mining, with 24 members voting in favor of the ban.

An alternative amendment was taken up, which puts bitcoin and crypto mining into part of a classification system. There are still hurdles, as crypto-related activity could be classified as unsustainable. According to Patridck Hansen, developer at Unstoppable Finance, “If POW was to be deemed unsustainable under the taxonomy (very likely), mining companies would have a much harder time getting money from European investors, companies, and governments that have to allocate more and more of their capital towards green objectives.”

The U.S. could end up being uncontested leaders in the crypto space. Biden recently issued an executive order that could lead to further clarity in the government’s stance on cryptocurrencies. Ari Redford, head of legal and government affairs at TRM Labs, said to Forbes, “The executive order is really a call for coordination—playing quarterback to ensure that regulators are working together to feed into a clear and consistent framework for crypto regulation rather than engage in disparate work streams.”

The VanEck Digital Assets Mining ETF (DAM) provides investors access to companies driving the digital transformation, with a focus on mining firms. DAM tracks the MVIS Digital Assets Mining Index. Companies on the index must generate 50% of their revenue from digital asset mining activities or mining-related technology. Another option for exposure to the space is the VanEck Digital Transformation ETF (DAPP C+).