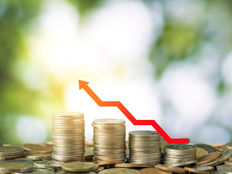 Bitcoin may have reached a bottom as downward selling pressure appears to be subsiding. It’s an opportune time for bullish traders and investors to buy.

The past weekend saw bitcoin rally past $40,000 after falling below that level towards the end of January. At the same time, bitcoin’s drop coincided with the volatility in the stock market indexes as investors fretted over inflation and rising yields.

The Federal Reserve signaled a move towards tighter monetary policy with the economy starting to heat up after the effects of the pandemic. Bitcoin, largely seen as asset uncorrelated to the stock market, followed suit and dropped to a bottom of about $33,000 before its recent rally.

“Cryptocurrencies fell sharply in January after the Federal Reserve signaled it would likely move more quickly than expected to remove pandemic-era stimulus due to high levels of inflation,” a Forbes report says.

Doggedly bullish investors who were constantly buying the dip have been rewarded thus far. Whether or not the leading cryptocurrency can sustain this rally remains to be seen.

As mentioned, bitcoin has been building a reputation as an uncorrelated asset with respect to the stock market, but it’s also been mimicking the stock market rally. Bitcoin was recently up close to 10% on Friday, while the DJIA was up just under 1%.

Getting Bullish With Bitcoin

In the meantime, investors who want to get bullish on the leading cryptocurrency without having to invest in the coin itself can use BITO. Furthermore, if bitcoin contracts seem like a complicated affair, BITO is an actively managed ETF. This essentially puts the bitcoin futures trading in the hands of seasoned professionals. Investors looking to add cryptocurrency exposure, but who are still hesitant, can use BITO as an entry point.

The fund is ideal for investors looking to complement their portfolios further with digital asset diversification in addition to their other alternative investments. With the availability of the ETF on a traditional stock market exchange, BITO isn’t prone to the potential hacking that public digital currency exchanges may experience.