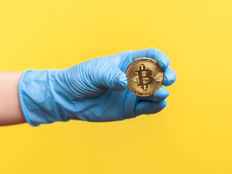 While cryptocurrencies can be touted as a new asset class that gives uncorrelated market exposure, the market wasn’t immune to the volatility from the new COVID-19 variant dubbed “Omicron.”

The Dow Jones Industrial Average underwent a post-Thanksgiving rout that saw it fall over 900 points last Friday. In the meantime, bitcoin didn’t fare much better.

“The world’s biggest cryptocurrency sank nearly 8% in the last 24 hours to $54,321, according to Coin Metrics data. The slide brought bitcoin to its lowest level since early October,” CNBC reports.

Notably, however, the leading cryptocurrency has gotten less volatile compared to its early years of development. In an article earlier this year, personal finance website Kiplinger noted that bitcoin has been less prone to large market swings in recent years.

“Understandably, the early years of the cryptocurrency were punctuated by large price swings that would regularly deviate beyond 10% of bitcoin’s daily returns,” said Kiplinger. “We can see evidence of less volatility in BTC following its late 2017 rally and subsequent pullback, with the coin only surpassing this 10% deviation barrier once since then.”

“This gradual calming influence is largely attributed to the arrival of more institutional investors into the cryptocurrency ecosystem,” Kiplinger added. “Theoretically, as more money is invested, the more stable BTC prices will become.”

Looking most recently at the large market dips, bitcoin fell less during the post-Thanksgiving downturn than it did during the March sell-offs in 2020. Bitcoin was down over 60% from its high in 2020, but during last Friday’s sell-off, it was down just 20% off its high.

ETF provider VanEck notes that bitcoin can actually exhibit less volatility versus certain stocks. This could have certainly been a selling point to the Securities and Exchange Commission (SEC) to try and get a bitcoin spot price ETF to the market, but to no avail.

“In our long-term study of bitcoin, we had compared bitcoin correlations to traditional asset classes and now see another interesting recent trend with its volatility,” VanEck notes on their website. “In our current volatility research, we compared the 90 day and year to date volatility—as measured by their daily standard deviation1 as of 30 June, 2020—of bitcoin against the constituents of the S&P 500 Index.”

“We found that bitcoin has exhibited lower volatility than 172 stocks of the S&P 500 in a 90 day period and 155 stocks YTD,” VanEck says.