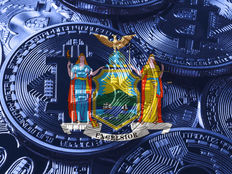 In what could be good news for crypto mining ETFs such as the VanEck Digital Assets Mining ETF (DAM ), the New York State Senate has declined to include the NY Mining Moratorium bill in its final session.

The bill had drawn criticism from the crypto industry, as many saw it as a potential gateway toward an outright crypto mining ban in New York. An earlier version of the bill sought to place a three-year moratorium on mining while environmental studies on the practice were executed. Some industry experts and lawmakers were concerned that regardless of whether or not the bill was passed, it could have sent a bad signal to the crypto industry and pushed jobs and tax revenue to other states.

“I think one of the biggest issues [with the bill] is that you have ‘New York’ and ‘moratorium’ in the same sentence,” said John Olsen, the New York state lead for the Blockchain Association.

Assemblywoman Anna Kelles sponsored the Assembly version of the bill, which passed last week. The Senate version must also pass before it can be signed into law by New York Governor Kathy Hochul.

The bill is likely to stall out if it does not get taken up in this session. The Environmental Conservation committee is chaired by Senator Todd Kaminsky, a Democrat who has previously questioned the merits of the bill. “I really believe in a new green economy and fighting climate change,” Kaminsky told CoinDesk. “The question we have to ask is, ‘How much will this law go toward helping us reach our climate goals versus harming a nascent industry that I feel is going to be increasingly critical to our state’s economy?’ I’d like to do everything we can to make crypto mining more eco-friendly, and there’s great innovators doing that now,” Kaminsky added. “But I think this will be seen as extremely hostile … I think it’s going to lead to really deleterious economic consequences for New York if people perceive it as being hostile to crypto.”

There is still an avenue for the bill to be considered this session. If Senate leader Andrea Stewart-Cousins decides to bring the bill through the Rules Committee and it passes through that committee, it could end up going before the Senate. The advocacy group Blockchain Association believes that the bill will have a harder time passing the Senate than it did passing the Assembly.

John Belizaire, CEO of green data center developer Soluna Computing, said to Cointelegraph that the moratorium will certainly “have a cooling effect” on crypto mining in the state, but he does see a potential upside in the increased environmental scrutiny, and said, “We’d encourage the state to participate in open dialogue with forward-looking companies to learn how the crypto mining industry could accelerate New York’s renewable energy development.” Belizaire added, “I think the moratorium will have mining companies give a second thought to using fossil fuels to power their operations. New York’s mission is clear: It’s all in on renewables. PoW crypto mining needs to get on the bus.”