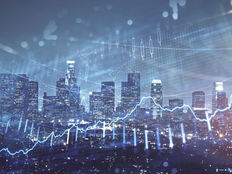 Since the Russian invasion of Ukraine began last Thursday, bitcoin has risen 13%.

Both Russia and Ukraine have seen huge upticks in trading volume. “Basically, having a currency that is not controlled by the government, that is not affected by the emergency acts … is really interesting,” said Bea O’Carroll, managing director at Radkl, a digital asset firm. “Maybe this is how Russia gets its value moved around. Equally, on the other side, there was ‘this is how people are going to get value to the Ukrainians.’”

Russian banks have lost access to the global SWIFT system, causing some to speculate that cryptocurrency could help the warmongering nation blunt the effect of sanctions. However, some experts think that Russia’s size may impede them. “There simply isn’t enough global (crypto) liquidity to support Russia’s needs,” wrote Asheesh Birla, senior vice president for product for Ripple, the world’s third-largest digital currency. Birla notes that Russia conducts nearly $50 billion in foreign exchange transactions daily, which is roughly equal to the entire value of all bitcoin transactions worldwide.

Transactions still leave data fingerprints, and evading sanctions could be complicated. A major bitcoin heist in 2016 led to two arrests in part because the culprits were unable to launder the stolen money or conceal its origins. Caroline Malcolm, head of international policy at distributed ledger research firm Chainalysis, told Coindesk that suspicious payments can be flagged. “We’ve seen that in the past with sanctions, you’ve got examples where wallet addresses have been named as sanctioned entities and that allows Chainalysis to put in place alerts for our customers, whether they be government or from industry,” Malcolm said. “So that if they have transactions, which you know, intersecting with sanctioned entities, they’ll be able to see those and get an alert on those immediately.”

The past few days have shown that cryptocurrencies can perform well during tumultuous times, with bitcoin’s surge outperforming traditional safe haven assets. As the crypto space becomes more mainstream, problems will arise demanding innovative solutions from the companies that interact with the space. The Vaneck Vectors Digital Transformation ETF (DAPP C+) has several of those companies in its holdings. DAPP provides exposure to the digital infrastructure around cryptocurrency. This includes exchanges and other firms on the forefront of digital transformation.