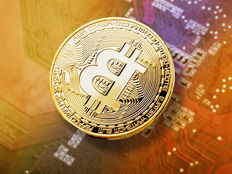 Bitcoin and digital assets in general are feeling the pain of the inflationary environment that’s worrying about a forthcoming recession. Despite the recent weakness in the leading cryptocurrency, sentiment is higher.

As CoinDesk reported, prices of the leading cryptocurrency “were at $30,272 late Sunday, after falling as low as $28,700 earlier in the week. Bitcoin last saw a positive week of gains in mid-March as prices jumped from $41,000 to $46,000,” while CoinDesk also noted that bitcoin “has slid every week since then, falling nearly 60% from November highs of just over $69,000.”

Cryptocurrency traders are now faced with the decision of whether to keep buying into the dip or to sit on the sidelines in order to avoid catching the proverbial falling knife. However, data from the on-chain analytics tool Sentiment may hint that prices of the leading cryptocurrency have finally hit a bottom and a much-needed bounce could take place.

While that data in and of itself appears bleak, what happens afterwards could provide a glimmer of hope for bullish crypto investors.

“Prices are historically likelier to rise when sentiment reaches low levels, the firm said. Data shows bitcoin prices have risen three out of the past four times the indicator has reached similar levels,” the report added.

It’s certainly a sign of the times with regard to a market correction after cryptocurrencies and digital assets in general exploded in popularity in 2021. The recent correction has many market pundits comparing the DotCom bust in the early 2000s to the current crypto market where essentially only the strong survive.

“CoinShares data for last week showed a record weekly outflow of institutional investors from crypto funds since the start of the year,” FxPro market analyst Alex Kuptsikevich told CoinDesk in an email. “Funds are operating cautiously, and their actions may be holding back growth while buying on the dips comes from retail and crypto-kits.”

Instead of opting to invest directly in bitcoin, investors can pursue other options, such as exchange traded funds (ETFs) that target bitcoin futures as opposed to the cryptocurrency itself. For investors worried about security via online cryptocurrency exchanges, the ProShares Bitcoin ETF (BITO) offers the opportunity to invest with confidence in a traditional market exchange — in this case, the New York Stock Exchange.