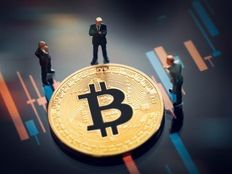 After a spate of sell-offs in the first half of 2022, technical analysis may be showing that bitcoin is ready for another rally. Whether it can sustain one this year is anybody’s guess, but the leading cryptocurrency could finally be poised for a long-term uptrend.

If that’s the case, exchange traded fund (ETF) investors can get in on the action with the U.S. Bitcoin-Linked ETF (BITO ). The fund focuses on bitcoin futures, allowing investors, short-term or long-term, to get exposure to the leading cryptocurrency on a traditional market exchange.

As far as a rally is concerned, CNBC’s “Mad Money” host Jim Cramer noted that a chartist foresees a rally over the next few months. However, reaching that old high of almost $70,000 from back in November 2021 will take some time.

“The charts, as interpreted by Tom DeMark, suggest that bitcoin could have a nice relief rally over the next few months, even if he doesn’t see it revisiting its old highs for years or even decades,” Cramer said.

“I can’t countenance buying crypto here, but if you still own some and you want out, I’m betting that from this, if you’re another dip down, you might get a better price to get out,” Cramer added.

Bitcoin has followed stocks and bonds on the way down in the first half of 2022 with the same inflation fears and recession risks. The leading cryptocurrency fell below $20,000 before coming back, but Cramer noted that those same highs in 2021 could be a long way from returning.

“According to DeMark, when you get a decline this ugly … it often does structural damage to the asset in question,” Cramer said. “If you’re thinking long-term, DeMark says that it could take many years for bitcoin to come near its old highs, maybe even decades. It’s possible we’ll never see them again.”

Just how severe have the drawdowns been for bitcoin this year? Cramer noted that in DeMark’s analysis, bitcoin has never had a downside retracement of over 50% on a closing basis since 2020.