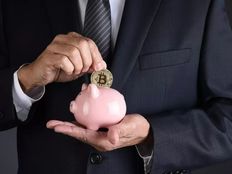 Cryptocurrencies began as a revolution against traditional finance, seemingly untethered and without correlation to anything else in the market. As they have become more mainstream and widely accepted, they have started behaving increasingly like equities. As such, the central bank’s monetary policy is going to impact them.

Analysts aren’t expecting any abnormal movement, as the market has anticipated a rate hike of 50 basis points, but if Fed Chair Jerome Powell strikes a more hawkish or dovish stance than expected, that could send crypto prices dropping further.

“I would be shocked to see the crypto market drop substantially by the close of the stock market Wednesday. Longer term, there is also strong buyer support for Bitcoin at the $30,000 and $28,000 level. It would have to take something really spooky, a significant change of course to shake people out at those levels,” said GSR crypto trader John Kramer. Bitcoin fell to $37,732 yesterday, 45% off its all-time peak from November 2021.

According to Bloomberg Intelligence senior commodity strategist Mike McGlone, any movement in bitcoin’s performance today is more than likely to be “trader noise.”

“The bottom line is that one of the most rapidly growing assets in recent years are cryptocurrencies so they have the most to lose, despite that Bitcoin has been showing divergent strength,” McGlone said, noting bitcoin’s year-to-date drawdown relative to the Nasdaq.

Even with cryptocurrencies becoming mainstream, they remain the new kids on the blockchain. The recent dip in crypto prices presents a potential bargain opportunity for investors curious about the space. ProShares CEO Michael Sapir said in a recent interview, “Bitcoin seems to have correlated with the movements of stocks. I don’t know if that’s a permanent condition. And there’s been substantial periods in the past where bitcoin has performed uncorrelated with stocks and bonds.” The ProShares Bitcoin Strategy ETF (BITO ) launched last October, rocketing to over $1 billion in AUM in just two days.