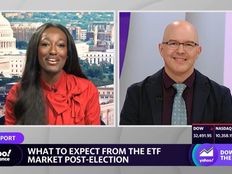 “If you look at where that money is actually going, a big chunk of it went to U.S. equities. Over $50 billion flowed in,” Nadig said, noting that where it went inside that was more complicated. “We’re not seeing a ton of money flow into the riskiest of risky ETFs, but we are seeing more interest in technology than we have in a long time.”

Nadig also observed that there is ongoing interest in dividend strategies and, surprisingly, Dow funds. On the fixed income side, Nadig said that high yield junk bonds are having a moment. Overall, he sees investors as looking at getting back to core exposures.

Asked if the tech surge was surprising, Nadig said, “if you talk to investors who are trying to be tactical, what you’ll hear from them is they do look for bottoms.” With high profile launches way down, such as the ProShares Bitcoin Strategy Fund (BITO ), which is 70% down, valuation opportunities abound. Nadig said caution is advised as calling a bottom can be tricky, but he observed that “at some point, all of these stocks have to be buys again.”

As crypto continues to struggle, Nadig conceded that the young asset class might be floundering with its investment pitch at the moment but noted, “at the same time, it doesn’t put any roadblocks and regulatory hurdles in getting those things approved.” He thinks a bitcoin ETF is still at least a year away, but recent news could help illustrate the need for a regulatory framework.

In the Mouth of Midterm Madness

Tuesday’s election had many pundits anticipating a Shining-esque red wave, but outside of Florida, that didn’t manifest. Asked how this could impact the markets, Nadig said, “we’re in the middle right now – we still don’t quite know what the end result will be. If you look at the market activity, it’s tough for me to see the market being down one or two percent as a direct reaction to what we’ve seen in the election cycle.”

Nadig concluded, “the business cycle is what matters more.”