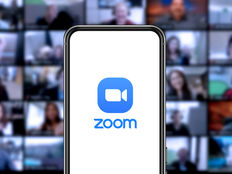 According to ARK’s open-source research and model, Zoom’s share price could approach $1,500, compounding at a 76% annual growth rate, in 2026.

“We believe current pivots back to in-office mandates could be part of a trial-and-error process for employers that will increase the percent of workers in hybrid/remote working models during the next five years. In our mean projection, we expect 75% of all global knowledge workers to participate in such arrangements, up from 51% in 2021,” the firm wrote. “Excluding knowledge workers from mainland China, we estimate that the addressable number of knowledge workers will grow 11% at a compound annual rate, from 489 million in 2021 to 832 million in 2026.”

“In all three price-target cases, we expect the average spending per paying user of Zoom’s video conferencing product to increase from $113 today to $188 in 2026, derived from the current cost of Zoom’s least expensive bundled offering, Zoom United Pro, and an enterprise discount of 25%. As enterprises continue to rip-and-replace legacy communications systems like on-premises phone and video, we expect that customers of Zoom’s core products will switch from video conferencing-only to a bundled solution containing video conferencing, phone, and chat,” the firm wrote. “Similarly, we expect Zoom to land new customers who will pay for “Zoom United” instead of purchasing core products separately. In our downside projection, paying users will purchase only the basic bundled product, still pushing ARPU up at an 11% annual rate from $113 in 2021 to $188 in 2026.”

Zoom is the top holding in two funds in ARK’s lineup of ETFs, including the ARK Innovation ETF (ARKK B+) and the ARK Next Generation Internet ETF (ARKW C+).