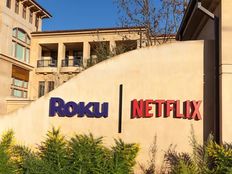 Speculation broke last Wednesday that Roku (ROKU) could be acquired by Netflix.

Much of the speculation ramped up in recent weeks among Roku employees after the company abruptly closed its trading window, according to Markets Insider, which is a period in which employees can sell their vested Roku stock

Companies often close trading windows ahead of schedule when material news is imminent, in an attempt to prevent insider trading from occurring.

However, looking at the details of the potential deal, there may be more upside for Netflix than for Roku.

“In our view, Netflix would gain much more than Roku in such a deal. As we have stated, after a disappointing first quarter, Netflix is looking at advertising to boost its revenues and user growth,” Nicholas Grous, associate portfolio manager for ARK Invest, wrote in a recent insight. “With a robust advertising business in the connected TV space, Roku could fast-track Netflix’s ambitions. Additionally, Netflix might be looking at broader play in the TV space, with Roku an ideal entree.”

Grous said with 61.3 million active accounts, Roku operates the number one TV operating system as measured by hours streamed in the US, Canada, and Mexico. As an intermediary connecting consumers, content providers, and advertisers worldwide, Roku is in the process of rebuilding the TV ecosystem on digital rails, becoming a new-age gatekeeper in the burgeoning digital entertainment space, and replacing the need for broadcast and cable companies.

“Albeit the largest, Netflix is just one of many subscription, video-on-demand services competing against Amazon’s ‘free’ service,” Grous wrote. “As a result, Roku would provide far more value to Netflix than Netflix would to Roku. In our view, Roku would be better off declining an offer and, instead, striking an advertising partnership with Netflix in a different and perhaps more productive way.”

ARK Invest has two funds in its ETF lineup that offer meaningful exposure to Roku.

Roku is the second-largest holding in the ARK Next Generation Internet ETF (ARKW C+), weighted at 8.12%, trailing Zoom Video Communications (ZM, 8.26%) as of June 7.