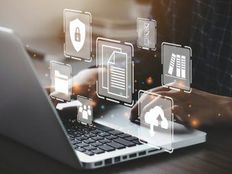 After years of outperformance, Growth and High Beta have been the year’s worst performers, according to S&P Dow Jones Indices. Spooked by a hawkish Fed, many investors took money off the table in June. However, two funds in ARK Invest’s range of active ETFs continued to attract inflows: the ARK Fintech Innovation ETF (ARKF B-) and the ARK Next Generation Internet ETF (ARKW C+).

ARKF saw $31 million in net inflows in June and ARKW took in $1 million during the month. The year-to-date net outflows for ARKF and ARKW amount to $87 million and $455 million, respectively, according to VettaFi.

ARKF invests in companies deemed to be engaged in the theme of fintech innovation, defined as the introduction of a technologically enabled new product or service that potentially changes the way the financial sector works. This includes transaction innovations, blockchain technology, risk transformation, frictionless funding platforms, customer-facing platforms, and new intermediaries, according to the fund’s website.

Companies within ARKW are focused on and expected to benefit from shifting the bases of technology infrastructure to the cloud, enabling mobile, new and local services, such as companies that rely on or benefit from the increased use of shared technology, infrastructure, and services, internet-based products and services, new payment methods, big data, the internet of things, and social distribution and media, according to the fund’s website.

June was a noteworthy month as all areas and sectors of the market struggled, including value stocks and energy, which both demonstrated more resiliency earlier in the year.

“We decidedly entered a bear market this month, as higher inflation, higher interest rates, and a slowing economy pushed the S&P 500 into official bear territory (down 20% from its last closing high, in this case, Jan. 3, 2022’s 4,796.56)," Howard Silverblatt, senior index analyst, product management, for S&P Dow Jones Indices, wrote. “It reached a closing low of -23.55% (3,666.77, on June 16), then seesawed upward, as buyers went bargain hunting, but with slower trading than when sellers dominated the market.”