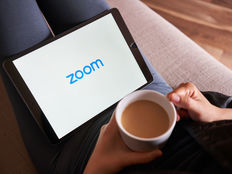 Once-hot Zoom Communications (ZM) is off 24.39% year-to-date with a fair amount of that weakness attributable to a late September decision to walk away from a proposed $14.7 billion all-stock takeover of Five9 (FIVN).

Five9 shares plunged in the wake of the offer — an unusual reaction by a targeted firm — prompting investors in that company to vote against the acquisition. Now, some investors might be looking at Zoom as no more than a relic of the early days of the coronavirus, but that could be miscalculation on their parts.

“One of the most important changes involved work. Stay-at-home orders forced workers—including key decision-makers—to assess the productivity of remote and hybrid-workforce models,” notes ARK Invest research. “According to Gartner, by the end of this year, the percent of all knowledge workers working remotely will approach 51%, nearly double the 27% in 2019.”

Adding to the case for Zoom is that most workers whose jobs allow for it prefer working from home. That could be a positive for Zoom shares going forward and could matriculate down to exchange traded funds with solid allocations to the name. That group includes the ARK Innovation ETF (ARKK B+) and the ARK Next Generation Internet ETF (ARKW C+).

To be precise, ARKK and ARKW are two of the top four ETF holders of Zoom stock, according to ETF Research Center data.

What’s interesting about Zoom is that while it felt like it became a ubiquitous brand at the start of the pandemic, the truth is that this is a $74 billion company in a field that’s only now scratching the surface of growth potential. That nascent stage status could be a long-term positive for the stock and the ETFs, like ARKK and ARKW, holding the shares.

“Despite this significant shift, Unified Communications (UC) for hybrid and remote-only working models seems to be in the early stages of adoption,” according to ARK. “To service decentralized knowledge workers, enterprises will have to invest in UC platforms to ensure the ubiquity of two-way communication channels. Firm-wide adoption will be critical to communication between and among individuals and teams in different departments and geographic regions in a digital-first age.”

Not only is Zoom topping rival offerings such as Microsoft Teams, Google Team, and Cisco Webex with fewer distribution advantages, but there is a long runway for increasing UC spending.

“According to Gartner, global cloud-based UC spending today is only $45 billion per year, which, spread across our estimate of approximately 1 billion knowledge workers, amounts to less than $4 per knowledge worker per month,” adds ARK.