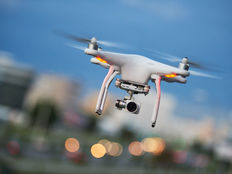 Drones Getting in On the Action to Fight Coronavirus

When the going gets rough when it comes to limiting the spread of coronavirus, send in the drones. At least that’s what certain countries have been doing in order to combat this global pandemic.

For instance, China is using drones to ensure that its citizens are taking the necessary precautions to prevent infecting others.

“Shenzhen company MicroMultiCopter deployed more than 100 drones to many Chinese cities that could patrol areas and observe crowds and traffic more efficiently,” a Forbes article stated. “Those not wearing masks in public spaces could be identified. These flying robots are also used to broadcast information to a larger area than traditional loudspeakers can. Another way drones are used to fight coronavirus is to spray disinfectant in public spaces. Through thermal sensing, drones are also helping officials with crowd management and to identify people with elevated body temperatures, which could indicate they have the virus.”

In Japan, drones are being used to handle logistical challenges like transferring medical supplies without exposing risk to humans.

“Japanese company Terra Drone ensured that medical and other supplies were safely transported from Xinchang County’s disease control center to the Xinchang County People’s Hospital without exposing humans to infection,” the report added. “They obtained the first urban drone delivery license issued by the Civil Aviation Administration of China. According to reporting by GPS World, using drones speeds up transport by 50% compared to road transportation. In addition to speed, it doesn’t expose human delivery drivers to any risks.”

Take to the Skies with This Drone ETF

It’s just one reason for ETF investors to consider the ETFMG Drone Economy Strategy ETF (IFLY B-). IFLY seeks to provide investment results that correspond generally to the price and yield performance of the Reality Shares Drone™ Index, which tracks the performance of the equity securities of companies across the globe and across a wide variety of industries that are actively involved in the development, research, or utilization of drones.

Per the fund’s website, IFLY was “created to provide the market with a transparent vehicle to invest in the increasingly important drone tech sector.”