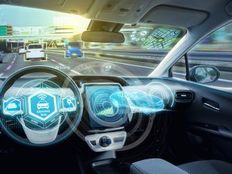 Significant benefits of occupancy networks include asking whether or not a voxel is occupied, predicting an object’s volumetric occupancy, and predicting the future movement of each point in 3D space using video instead of individual camera frames, Ashok Elluswamy, a director on Tesla’s autopilot software team, said in a a recent keynote at the Conference for Computer Vision and Pattern Recognition (CVPR). As a result, with less computing power, FSD software’s ability to estimate the velocity of vehicles crossing intersections at a distance has improved 20%, according to Keeney.

“Notably, occupancy networks enable Tesla to estimate the depth and velocity of objects with the use of cameras only, while competitors use a combination of cameras, LiDAR, and radar. This update will produce valuable feedback and training data for future FSD releases,” Keeney wrote. “Based on data from ~100,000 cars, multiple orders of magnitude more than competitor fleets, we believe its FSD capabilities are likely to position Tesla uniquely in the race toward autonomous taxi platforms.”

Investors can gain meaningful exposure to Tesla with the ARK Autonomous Technology & Robotics ETF (ARKQ B), which gives Tesla a weight of 11.46%, and the ARK Next Generation Internet ETF (ARKW C+), which weights Tesla at 9.41%, as of August 25.

ARKQ invests in companies focused on and expected to substantially benefit from the development of new products or services, technological improvements, and advancements in scientific research related to, among other things, energy, automation and manufacturing, materials, artificial intelligence, and transportation. These companies may develop, produce, or enable autonomous transportation, robotics and automation, 3D printing, energy storage, and space exploration.

Companies within ARKW are focused on and expected to benefit from shifting the bases of technology infrastructure to the cloud, enabling mobile, new, and local services, such as companies that rely on or benefit from the increased use of shared technology, infrastructure and services, internet-based products and services, new payment methods, big data, the internet of things, and social distribution and media. These companies may develop, produce, or enable cloud computing and cybersecurity, e-commerce, big data, artificial intelligence, mobile technology and internet of things, social platforms, blockchain, and P2P.