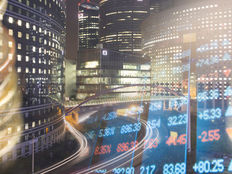 An overlooked and often-misunderstood corner of the energy industry, midstream companies feature impressive income potential for investors, says Stacey Morris, Alerian’s director of research. In fact, in Q3 2021, not a single midstream company cut their dividends, she reports. Looking ahead to 2022, their growth story may only ramp up further.

In her role as director of research, Morris engages with the investment community to increase awareness of the Alerian’s indexes and support broader understanding of the role that midstream assets play in North American energy markets.

Recently ETF Trends’ managing editor Lara Crigger sat down with Morris to discuss the current state of the midstream industry, as well as what investors can expect for 2022.

Lara Crigger, managing editor, ETF Trends: Recently, Alerian published a quarterly research report on dividends in the midstream space. Can you give us the big takeaways? What can investors expect moving forward?

Stacey Morris, director of research, Alerian: This quarter was notable because it was the first quarter since  2019 that we haven’t seen a cut at all in the midstream space. That’s not to say that we’ve seen many cuts every quarter, but there’s been at least one or two here and there. But this is the first quarter in about two years where we haven’t seen a cut. So that’s nice to see.

We also saw two large MLPs resume growth of their distributions, after holding steady since the pandemic began. One of those names also did a special distribution, sweetening the pot for those income investors. The other had exhausted its buyback program in the third quarter. So we’re seeing a two-pronged shareholder return strategy of buybacks and, in some cases, dividend increases.

I think the outlook is that we’d expect to see potentially a little more action in terms of dividend increases moving forward, as the macro environment has become more stable and companies are yielding at levels more in line with historical averages. It’s hard to get excited about raising your dividend if your yield is over 10%! So there’s a combination of factors in this space leading to a more conducive environment for raising dividends. Free cash flow generation is part of that.

There’s a stronger macro energy environment, too. They’re seeing improved commodity prices. They’re seeing more upstream activity to an extent, although the activity upstream is going to be more balanced and moderate than it has been in the past. There are a numbers of tailwinds, really, adding confidence to management teams’ outlooks. And so that gives more comfort around both buybacks and dividend increases.

Crigger: What’s the nuance between midstream versus upstream energy companies?

Morris: Midstream companies are what I like to call the “shipping and handling” part of the energy value chain. These are the companies that are transporting and storing hydrocarbons, and processing natural gas into usable form, because what comes out of a well is not what can be used in your natural gas stove. Upstream refers to the oil and gas producers. Then, downstream is refiners, chemical plants, and gas stations.

So midstream serves as that middleman between the oil and gas producers and downstream and end uses, which are more consumer-facing.

Crigger: So when we’re seeing all of these headlines about how the global supply chain is completely broken, which companies are impacted most in that upstream to midstream to downstream chain?

Morris: Yeah, those issues don’t have as much of a direct impact on the energy space. Which sounds weird, but if we have supply chain issues in energy, you notice it really quickly at the pump.

Obviously there is an energy crisis going on, particularly in Europe, around natural gas. But that has more to do with not properly filling inventories leading up to the winter, as well as increased demand for LNG in other parts of the globe and less renewable generation at times during this past year. There’s a number of factors that have led to this global energy crunch. Supply is an issue, but the supply chain isn’t the issue.

I do think it’s interesting from a standpoint of highlighting the fact that the infrastructure that these midstream companies operate is essential to our everyday lives, as well as essential to people overseas who are importing liquefied natural gas or importing U.S. oil or petroleum products.

Crigger: So midstream is a segment that’s insulated from the global supply chain situation? So many segments of the market have been impacted, but energy infrastructure is driven by different factors.

Morris: Right. It’s not as much of an issue for energy because we have these established channels for getting crude from the Permian Basin to a refinery in Houston, and then onto a ship or into a pipeline for distribution in the U.S. Those channels continue to operate smoothly.

To the extent that you talk about supply chain issues and how that leads to inflation, then that has a relationship with energy in the sense that energy tends to be a good inflation hedge. Midstream, in particular, is well-protected from inflation. These companies have long-term contracts that typically have inflation adjustments built into them.

For example, Enterprise Products Partners talked about on their earnings call that 90% of their revenues have some kind of escalation mechanism based on various indexes, so the midstream space tends to be pretty well-positioned for an inflationary environment.

Crigger: Why specifically is energy infrastructure so well-positioned for an inflationary environment? Doesn’t anything oil-related tend to do well in times of inflation?

Morris: Energy does tend to do well in an inflationary environment. Oil prices tend to go up, which is a good thing for energy stocks. But midstream is not as directly impacted by what happens with oil and natural gas prices. Pricing certainly matters for sentiment for the space, though, and for sentiment for energy, and we’ve typically seen good performance from midstream in years where there has been rising oil prices.

But the other aspect from a midstream perspective is that you have these nice dividends and yields, which can be potentially extra attractive in an inflationary environment, especially because the yields are so much higher than most other income opportunities that you see.

That’s because energy infrastructure companies are often MLPs, which tend to pay out more of their cash flows as distributions, because they don’t pay tax at the entity level. You also have now a number of midstream C-corps that also pay out attractive dividends. They’re drawing on that MLP legacy. These companies generate steady cash flows, and they’re using those steady cash flows to pay generous dividends. The business model, by being fee-based, lends itself to supporting these nice dividends. That’s what investors in this space have come to expect, and that’s what companies are largely focused on providing.

Crigger: The expectation becomes reality. Because MLPs’ structure gave them the ability to provide higher-than-average dividends, the idea has become table stakes for midstream companies.

Morris: Back in the day MLPs were issuing equity a lot. They were building all these pipelines, spending a massive amount of money. The focus in the past was to achieve 5-7% distribution growth. Now that that growth level proved to be unsustainable, we had a number of companies cut their payouts. Some didn’t, but some certainly did. So now it’s more about sustainable distribution growth and managing your capital allocation and your money wisely, those sorts of things.

So the space has changed a lot in that sense. But especially for those names, they’ve still got these legacies of years and years of dividend increases behind them, and they still want to grow their payouts but at sustainable levels.

Crigger: Infrastructure is top of legislators’ minds lately. Are there any big takeaways for midstream that you’re seeing in the discussions on Capitol Hill?

Morris: There’s still a little sausage-making left to happen, so I don’t want to get too ahead of myself. But there’s talk of 45Q credits, which relates to carbon capture. Higher credit there would be good for midstream, because you have a number of companies looking at supporting carbon capture opportunities. I think there were some provisions in there around hydrogen and spending money on that, which is also something that midstream companies are looking at with partners. So some of the clean energy stuff could be beneficial for this space, assuming it stays in.

The other thing that’s being talked about is extending the MLP structure to renewables. That idea has been introduced four or five times. It’s a bipartisan issue, but it has never seemed to get off the ground. But it seems like it might actually get into the bill this time. So maybe you’ll see, eventually, renewables adopt the MLP structure and bring more names to the space.

I don’t know how motivated renewables are going to be to do that, but for the existing MLPs, I think it would be positive, because then it would allow them to pursue more alternative energy projects and not have to worry about qualifying income and meeting requirements to be an MLP. Because now, as it stands, 90% of your income has to come from activities around natural resources.

Crigger: So where does midstream fit into a portfolio? Should it be part of a thematic commodities allocation? Part of an income-generating allocation? Where does the puzzle piece fit?

Morris: Typically we see people put it in income sleeves, and that’s the natural fit, given the yield. It’s also a good diversifier to an income portfolio, because the drivers for MLPs are different from the drivers of other income-oriented investments. It tends to exhibit a low correlation with things like bonds and utilities. MLPs are not in your broad market indexes. So that’s another layer of diversification.

We can see it as just the energy allocation of an equity sleeve, too. It’s a more defensive energy exposure relative to general energy. Some people will slot it into an alternative sleeve with other things, because of the tax structure. Then, another option is as part of a real asset exposure to infrastructure, for the different reasons we talked about earlier.