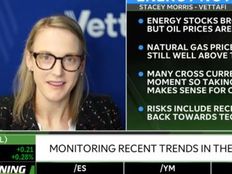 VettaFi’s head of energy research Stacey Morris appeared on TD Ameritrade, hosted by Oliver Renick, to discuss the crude oil tumble to $75 a barrel and what that means for investors.

“It’s been a rough ride here,” Morris said, noting that crude oil WTI is lower now than when it started this year, and well under June’s high water marks. Morris noted that there were a number of economic concerns weighing on oil; “everyone is worried about how aggressive the Fed is going to be with rate hikes and whether or not we can get the soft landing.”

Because crude oil is sitting at $75 a barrel, Morris thinks there’s more upside than downside risk. “From a downside perspective, the main concern is that we see a recession,” she said. Diesel demand tends to take a hit when the economy slows, which in turn drags down oil prices. According to Morris, there is an offset to that risk in OPEC+, which could intervene if prices get too low. “That can offset some of that downside if we do see a recession.”

Renick observed that one of energy’s main risks — a sector rotation back into tech — seems unlikely. He asked Morris where the stability in the energy space is, and Morris pointed to the midstream and energy infrastructure, which investors can get exposure to through ETFs such as the Alerian MLP ETF (AMLP A-).

Morris stated, “if you are looking for defensive energy exposure, the best place to hide and ride out a storm is in the energy infrastructure space.” With oil down over 7% and broader energy in a 5% tumble, MLPs are down less than 4%. Morris also noted that AMLP’s index is currently presenting a whopping 7.5% yield. “The midstream space can be more resilient when we see volatility in energy prices because these companies are generating fees for providing services. That results in much more stable cash flows then you’ll find elsewhere in the energy patch.”