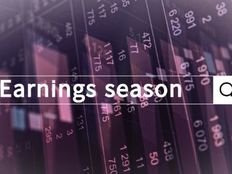 How Earnings Season Can Wreak Havoc on ETFs

Most index exchange-traded funds (ETFs) are weighted by market capitalization. After all, a company’s market capitalization captures all potential factors used to determine a stock price beyond revenue and dividends. The downside of this approach is that a small group of large-cap stocks might control an oversized portion of the overall portfolio. As such, any downturn in these companies can have a significant impact on overall performance.

Below, ETF Database takes a look at how earnings season has had a negative impact on several index ETFs and why smart-beta funds may present a solution.

Apple Inc. (AAPL) was the most valuable company in the world for several years as its iPhone became the gold standard for smartphones. According to SPDR, the company accounts for about 2.84% of the SPDR S&P 500 ETF’s (SPY A) portfolio, which has over $180 billion in assets. The company announced in April 2016 that its streak of 51 consecutive quarters of uninterrupted sales growth was over and expansion may not resume for a year.

The company’s stock price plummeted more than 10% over the subsequent days and erased about a hundred billion dollars from its market capitalization. Since it accounts for nearly 3% of the S&P 500, the stock’s decline also had a profound impact on one of the most widely followed U.S. indexes and its associated index ETFs. A Bloomberg analysis calculated that the SPDR S&P 500 ETF’s investors alone lost more than $1 billion in value.

These dynamics demonstrate the powerful effect that negative earnings can have on index ETFs that are weighted by market capitalization. Of course, the impact isn’t solely tied to the technology sector. Large oil companies, like Exxon Mobil, have erased billions of dollars from these same funds, while targeted funds could see even more acute declines.

The easiest way to avoid these problems is to read the prospectus of any index ETF that’s being considered. These prospectuses will contain a breakdown of the top holdings and the levels of industry diversification. Investors can also look in these documents for funds that operate using indexing methods other than market capitalization weighting in order to avoid some of these potential issues.

So-called smart-beta funds present an attractive alternative in the form of an index ETF that’s weighted based on factors other than market capitalization. For instance, a momentum-focused index ETF may weigh companies based on their price momentum. Apple’s sell-off in early January of 2016 could have reduced the exposure of these funds ahead of the bearish earnings and avoided some of the issues faced by index funds.

Most index ETFs are weighted by market capitalization, which leaves them exposed to the movements of a handful of companies. In some cases, poor earnings by these companies can result in significant losses for these funds. Investors can avoid these problems by keeping an eye on their ETF holdings or by leveraging so-called smart-beta ETFs that use alternative indexing methods designed to sidestep these issues.