This ETF offers exposure to one of the world's most widely-followed equity benchmarks, the NASDAQ, and has become one of the most popular exchange-traded products. The significant average daily trading volumes reflect that QQQ is widely used as a trading vehicle, and less as a components of a balanced long-term strategy. Of course, this fund can certainly be useful as part of a buy-and-hold approach for investors looking to maintain a tilt towards the potentially volatile tech sector. The composition of QQQ is certainly unique; this fund maintains a hefty allocation to technology companies, resulting in potentially significant volatility through heightened exposure to a sector that has historically experienced both impressive rallies and devastating busts. Moreover, the relative concentration (only 100 names) may be less than ideal--especially considering that a small handful of stocks make up a material chunk of the portfolio. QQQ is used primarily by short-term traders, as evidenced by the high average daily turnover. QQQ has penny-wide spreads and can be a nice tool for those looking to quickly establish a position in U.S. equity markets (though SPY accomplishes similar objectives). But investors building a retirement portfolio or maintaining a longer-term objective would be better served to look elsewhere for a fund that achieves better balance across various sectors of the economy. It should be noted that QQQ is cost efficient; the expense ratio is one of the lowest in the industry. Other more expensive alternatives offer similar exposure, including an equal-weighted version of the same underlying index (QQEW) and a version that focuses only on the non-technology components of the NASDAQ (QQXT).

There are 14 other ETFs in the Large Cap Growth Equities ETFdb.com Category that are also eligible for commission free trading:

The following chart also includes the option to compare the performance of QQQ relative to other ETFs and benchmarks or to include indicators such as Bollinger Bands, relative strength, and moving averages. 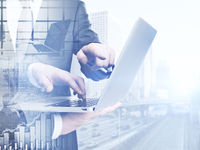 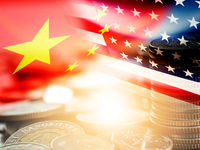 U.S. markets and stock ETFs were trying to regain lost ground Monday after the broad early... 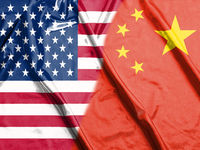 QQQ (QQQ A-) has been a perennial favorite for traders and investors alike who wish to gain exposure to large-cap technology and health care stocks. Over the last two years, QQQ has risen almost 50%, outperforming the broader market as technology has taken over from the financial sector to become the market leader. In the last six months, however, there has been a reversal of fortune, driven by headline risks that include a slowing Chinese economy, global deflationary pressures and erratic earnings impacted by currencies, among other things. This begs the question: is (QQQ A-) a worthwhile investment vehicle in 2016?

To answer that we need to take a deep dive into the structure of QQQ. The ETF tracks the Nasdaq 100, the top 10 constituents of which are facing cyclical headwinds as the Internet and smartphone era matures and enterprise technology slowly starts another upgrade cycle. Two notable exceptions in the top 10 holdings are Gilead (GILD) and Comcast (CMCSA), each a leader in their respective category. Combined, these top 10 stocks constitute roughly 50% of QQQ’s holdings.

Needless to say that the FANGs, Facebook (FB), Amazon (AMZN), Netflix (NFLX) and Google (GOOG), have been primary drivers behind QQQ’s 50% surge from 2012 to the end of 2015. Combined, FANGs constitutes 20.41% of QQQ. Fundamentally, Facebook and Google have continued to show strength in their display advertising and search advertising businesses. Netflix has also shown impressive growth in subscriber numbers and Amazon continues to efficiently reinvest cash generated at AWS into its core retail business to keep an extremely wide and deep moat in e-commerce. Having said that, over the last couple of quarters however, growth has been uneven, particularly with Amazon and Netflix.

That leads us to Microsoft (MSFT) and Apple (AAPL). Combined these two stocks compose just under 20% of the index. While Apple’s financial health is unquestionable, a lack of visibility around new products coupled with a maturing smartphone market and the dependence on China for growth are key headwinds. Similarly for Microsoft, the shift to mobile hasn’t been as successful as the company had hoped. Although, under a new management team the company has continued to outperform in its core business units, namely Windows and the fairly new Office 365 suite of products.

In essence, with the exception of Facebook and Alphabet (Google), there seem to be some headwinds for a group of stocks that compose about 40% of QQQ. It is unlikely that these headwinds will materialize into structural business problems, but given the runup in the last three years, 2016 is likely to be a breather.

That brings us to the other 60% of QQQ, which traditionally have been biotech majors, consumer staples and enterprise tech stocks. I expect further consolidation in the biotech space, even though takeover premiums are likely to be lower, given a decreased risk appetite in the global economy. Biotech equities have also come off recent highs and are going through a period of proving the revenue potential of their drug pipelines, as evident with Celgene’s (CELG) Revlimid and Gilead’s hepatitis drugs. Further, parts of enterprise tech are in the midst of an upgrade cycle, while the shift to the cloud continues to chip away at traditional software revenues. Combined with the fact that global CIOs and CEOs are taking a wait-and-watch approach to upgrading their infrastructure, enterprise tech’s growth prospects outside the U.S. look brighter in the second half of 2016 than in the first half.

Considering the above data, QQQ, like the Nasdaq 100, is a mixed bag. Consumer Internet and technology companies will continue to do well. However, sectors such as online retail and biotech have run up significantly in proportion to their earnings. Having said that, a majority of these companies have significant financial leverage to see through their respective business cycles.

Over the past five years, QQQ has averaged 14.53% in annual returns. The average book value of the ETF sits at 3.80 with a P/E of 20 (TTM). QQQ’s dividend yield is 1% and it’s YTD return is -6.94%. While there are better investment opportunities in specific components of the ETF, for someone who wants broad exposure to leaders in industries that are at the forefront of innovation, QQQ is a Buy at current levels with a price target of $106. Although, I believe it would be fiscally prudent to start accumulating QQQ in the mid-90s.

Click here to read about Emma’s views on Microsoft, the ETFs GDX, FV, TLT, VOO and VTI, and the ETNs TVIX and VXX.