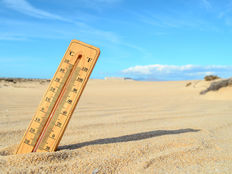 One of the first things on  President Biden’s  agenda was to rejoin the Paris Climate Accord.  Just yesterday, he announced executive actions to address climate change, emphasizing the importance of job creation in “green” industries and establishing goals to achieve a carbon pollution-free power sector by 2035.

His efforts to re-involve the U.S. on the global climate stage come at an important time.  The average global temperature has risen about two degrees Fahrenheit since the 1880s, when record keeping began. In fact, the decade that ended last year was the hottest in history.  Temperatures were higher than any other period in recorded history.

The primary culprit causing the warming, atmospheric carbon dioxide, has reached its highest level in recorded history.  In five major temperature datasets updated on Thursday, 2020 finished in a statistical tie with 2016 as the hottest year on record and 2019 comes in a very close third.  The chart below comes from Bloomberg Green.

Heatwaves, wildfires, more intense storms, and changes in rain and snow all point to a world already facing heightened danger.  With each passing year, scientists grow more confident in attributing many of these weather anomalies to the heat trapped in the atmosphere and oceans.  According to Ahira Sanchez-Lugo, a physical scientist at the U.S. NOAA National Center for Environmental Information, who was quoted in Bloomberg Green, “…when the ingredients for a hurricane come together, we’re seeing that these hurricanes are intensifying a lot faster…they’re moving slower, and the precipitations rates associated with these hurricanes are increasing.”

Ocean temperatures hit a new high last year.  Temperature data has borne out many of the projections made by climate researchers.  The modeling work continues in the climate science community, with the next reports from the UN-backed Intergovernmental Panel on Climate Changes expected this year and next.  As you can see below, the major predictive models have been largely correct.

The scale of the world’s CO2 pollution is so great that the pandemic-caused economic crash will barely register in emissions data.  The IEA estimates that CO2 emissions fell by about 8% over the previous year in 2020 or equivalent to pollution levels last seen in 2010.

Rising temperatures are impacting areas like the Arctic and Antarctica, as the world’s ice is melting at a faster rate than ever before.  Between 1994 and 2017, the Earth lost 28 trillion metric tons of ice, roughly equivalent to a sheet of ice 100 meters thick covering the entire U.S.  The meltwater from so much ice loss has raised the sea level just over an inch world-wide.  Ice plays a crucial role in regulating the global climate, and losses will increase the frequency of extreme weather events.

Larry Fink, CEO of asset management leader Blackrock, recently called on all companies to “to disclose a plan for how their business model will be compatible with a net-zero economy,” which he defines as limited global warming to no more than two degrees Celsius above preindustrial averages and eliminating net greenhouse gas emissions by 2050.  He says, “we expect you to disclose how this plan is incorporated into your long-term strategy and reviewed by your board of directors.”

Larry Fink’s words matter because Blackrock is amongst the top three holders of nearly every listed company in the U.S. and across the globe given the company’s focus on indexing.  The company’s size gives it enormous influence.  Last year, Blackrock voted against 69 companies and against 64 directions for climate-related reasons, while putting 191 companies “on watch.”  Over the past year, the European Union, China, Japan and South Korea all made commitments toward a net-zero future.