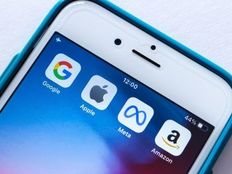 For all the talk surrounding and, more importantly, disappointing performances delivered by mega-cap growth stocks this year, some professional investors remain devoted to the likes of Apple (NASDAQ: AAPL) and Alphabet (NASDAQ: GOOG), among others.

That could be instructive to investors currently engaged with or considering exchange traded funds such as Invesco QQQ Trust (QQQ B+) or the Invesco NASDAQ 100 ETF (QQQM B). Both QQQ and QQQM follow the Nasdaq-100 Index (NDX), meaning both Invesco ETFs are homes to plenty of the marquee, big-name growth stocks some professional investors maintain high conviction toward.

Google parent Alphabet, Microsoft (NASDAQ: MSFT), Apple, and media giant Comcast (NASDAQ: CMCSA) are among the names money managers are displaying high conviction on. That quartet combines for over 35% of the QQQ and QQQM portfolios.

“Wide-moat Comcast was held by ten funds at the time of this article’s writing. This medium uncertainty stock currently trades at a discount to Morningstar analyst Michael Hodel’s fair value estimate of $60. The core cable business owns networks capable of providing television, internet access, and phone services to roughly 61 million U.S. homes and businesses, or nearly half of the country,” according to Morningstar research.

While the Nasdaq-100 Index is a growth index and, as such, is frequently home to stocks that are far from value ideas, some of its well-known components that fund managers favor are currently undervalued relative to historical norms.

“The remaining names on our top 10 conviction holdings list all trade at a discount to Morningstar’s fair value estimates, with Comcast, Amazon (AMZN), and Alphabet all trading at about 35% below our implied valuation,” adds Morningstar.

Amazon is the largest consumer discretionary holding in QQQ and QQQM at a weight of 7%. Adding to the allure of QQQ and QQQM as destinations for undervalued growth names are many of the ETFs components, including some of the high conviction names, fit the bill as wide moat stocks.