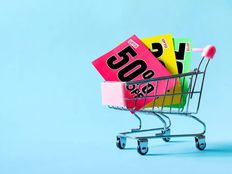 More than four months and two interest rate hikes into 2022, it’s no secret that growth stocks are enduring plenty of punishment.

With the S&P 500 in the midst of its worst weekly losing streak since 2011, it’s understandable that many investors aren’t thinking about increasing exposure to risk assets, including growth stocks. On the other hand, plenty of previously beloved growth equities are now deeply discounted by historical standards.

Risk-tolerant investors wanting to position for a potential growth equity rebound while eschewing stock picking may want to evaluate the Invesco NASDAQ 100 ETF (QQQM B). QQQM is the lower-cost alternative to the famed Invesco QQQ Trust (QQQ B+). Both exchange traded funds follow the Nasdaq-100 Index (NDX).

Across a variety of sectors, there are bargains to be had with growth stocks. Of course, some sectors have larger concentrations of growth fare than others, including technology and consumer discretionary. Those sectors combine for more than 77% of QQQM’s roster, confirming that the ETF is a prime avenue to inexpensive growth names.

“Between high inflation and a contraction in economic growth, Consumer Cyclical stocks fell 11.82% in April, the third-worst performing sector, and are down this year 21.22%. Based on our above consensus view for economic growth over the next few years, we see significant value in this sector, especially among companies in the services industries,” notes Morningstar analyst Dave Sekera.

Amazon (NASDAQ:AMZN) and Starbucks (NASDAQ:SBUX) are among the consumer cyclical names the research firm views as undervalued today. That duo combines for 6.75% of QQQM’s weight.

The communication services sector also offers some deals, including Alphabet (NASDAQ:GOOG) and Meta Platforms (NASDAQ:FB), which combine for about 11% of the QQQM roster.

“Meta’s ongoing strategy to monetize Reels, which currently has lower ad prices, was partially responsible for Meta’s revenue miss, as it drove its user monetization down slightly from last year. However, we remain confident that over time Meta will increase Reels monetization by attracting more advertisers with its large user base that is spending more time watching content on Reels,” adds Sekera.

Believe it or not, there are deals to be had among tech equities, too.

“Technology stocks have been some of the hardest hit names by this year’s selloff. We viewed the sector as one of the most overvalued at the beginning of the year, following its 21.07% pullback, we now see it as 12% undervalued,” concludes Sekera.

Microsoft (NASDAQ:MSFT) and Intel (NASDAQ:INTC) are among the tech names Morningstar says are undervalued. Those stocks combine for 12% of QQQM’s weight.