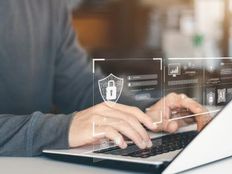 Following an impressive rally off the July lows, growth stocks, including plenty of technology names, limped into the end of August.

However, the outlook isn’t gloomy across the board, as some analysts see ongoing strength in cybersecurity stocks. Rather than stock pick among the group, investors can access multiple cybersecurity names under one umbrella with either the Invesco QQQ Trust (QQQ B+) or the Invesco NASDAQ 100 ETF (QQQM B).

While there are increasing concerns about the health of the consumer and some economists say the U.S. economy is in a recession, companies can’t skimp on cybersecurity spending. That risk isn’t worth the “reward,” and it amounts to be penny-wise/dollar-foolish. Recent earnings reports from some well-known cybersecurity companies confirm as much.

“Earnings reports this week from CrowdStrike and SentinelOne pleasantly surprised Wall Street, and both companies, which specialize in protecting the many devices attached to corporate networks, boosted their forecasts for the year,” reports Jordan Novet for CNBC. “Investors heard similar commentary last week from Palo Alto Networks, which reported a profit for the first time in a decade. The data center security company’s stock soared 12%, its best performance since its IPO in 2012.”

Palo Alto Networks (NASDAQ: PANW) and CrowdStrike Holdings (NASDAQ: CRWD) are both members of the QQQ and QQQM portfolios.

Cisco Systems (NASDAQ: CSCO), a member of the Dow Jones Industrial Average and QQQ and QQQM, is a big-time cybersecurity play in its own right and one that’s providing investors with some encouraging news, too.

“And two weeks ago, Cisco said its security business grew faster than all other segments, surpassing analysts’ estimates by about $100 million. Security is now Cisco’s top investment area, CEO Chuck Robbins told analysts on a conference call, and the company is staffing up as it raises prices to counter higher costs of components it needs to assemble hardware,” according to CNBC.

Adding to the allure of QQQ and QQQM as cybersecurity bets is the point that while some companies are looking for ways to trim spending, they can’t indulge that luxury with cybersecurity.

Palo Alto Networks “said clients signed up for long-term deals during the quarter. That lines up with commentary from Guggenheim analysts, who wrote in a note to clients that security spending among companies they cover hasn’t moderated as much as IT spending,” notes CNBC.