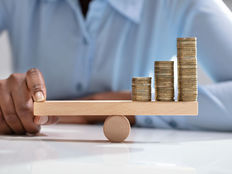 Are Equal-Weight ETFs on the Dip a Buying Opportunity?

There are times, including some lengthy periods, when the Invesco S&P 500 Equal Weight ETF (RSP B+) tops cap-weighted versions of the S&P 500. There are also times when that does not happen.

What’s instructive is that when RSP lags by wide margins, history indicates it’s likely to snap back in impressive fashion.

“Three months ago, we observed that times of severe underperformance for Equal Weight can bode well for future performance,” according to S&P Dow Jones Indices. “This reflection had become reality by the end of February. After almost four years of underperformance, the S&P 500® Equal Weight Index outperformed the S&P 500 by 1.6% over the past 12 months. This result may be the beginning of a trend in mean-reversion that we observe from the exhibit’s historical peaks and troughs.”

RSP equally weights its holdings, so the ETF leans toward smaller companies with reduced concentration risk to the largest companies when compared to the cap-weighted benchmark S&P 500 Index. The size factor offers the potential higher-than-benchmark returns associated with relatively smaller stocks within the universe being considered. Smaller capitalization companies tend to have higher growth potential, and are less widely researched.

There are compelling reasons to consider RSP in this environment.

“The turning of the tide for Equal Weight was primarily driven by strength in smaller caps, as Equal Weight has a small-cap bias,” notes S&P Dow Jones. “Equal weighting within Financials and Industrials was a key contributor to the recovery in Equal Weight.”

RSP is considered one of the industry’s first and oldest smart or strategic beta ETFs. The fund eschews traditional market-capitalization weighting schemes in favor of a very simple alternative by equally weighting each of its components, ensuring that the smaller names within the S&P 500 are weighted as heavily as their larger peers.

RSP is an ETF play for investors looking to diminish unforeseen risks of traditional market cap-weighted funds. The recent pullback in technology stocks reveals risks associated with being overweight an overcrowded trade.

“The comeback of smaller-caps and Equal Weight might have positive implications for active managers, as their portfolios tend to be closer to equal than cap weighted,” notes S&P. “Finally, we’ve written previously about how the current environment compares to the tech bubble of the late 1990s. Concentration levels in the cap-weighted S&P 500 exceed those of 1999; an equal weight alternative could potentially offer above-average diversification benefits.”