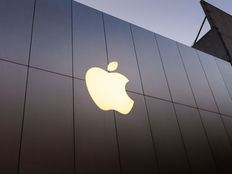 ETFs That Could Benefit From a Winning Apple Strategy

Like other technology behemoths, Apple (NASDAQ:AAPL) is slumping this year, but that doesn’t mean the case for the iPhone maker’s shares is dead, nor does it mean that the company’s fundamentals are flawed.

Apple’s fundamentals remain sturdy, and that’s to the benefit of exchange traded funds with sizable allocations to the stock, including the Invesco QQQ Trust (QQQ B+) and the Invesco NASDAQ 100 ETF (QQQM B). QQQ and QQQM are among the ETFs with the largest weights to Apple, which is relevant given the company’s penchant for innovation.

Apple’s storied history of innovation and its abundant financial resources set the stage for the company to be a viable player in each new market it enters. Next up could be online advertising.

“In a research note Thursday, BofA Global Research analyst Wamsi Mohan explores the potential for Apple (ticker: AAPL) to build a more substantial ad business. He estimates that Apple in the September 2022 fiscal year will rake in about $5.3 billion in revenue from search ads in the App Store, and he sees the total reaching $9.8 billion in fiscal year 2024,” reported Eric Savitz for Barron’s.

On a standalone basis, those estimates are impressive, considering that Apple’s ad business is still in its nascent stages, but those figures also represent scant percentages of the company’s current market capitalization of $2.39 trillion (as of July 14), indicating that ads will be a small percentage of the company’s revenue stream to start.

In the “patience required” category, the aforementioned forecasts are expected to ramp significantly higher in the future, potentially highlighting opportunity with QQQ and QQQM as ETF proxies on Apple shares.

“Mohan asserts that Apple’s biggest asset is its large installed base—there are about 1.8 billion devices in around the world, which he sees as potential conduits for advertisers to reach a large population. By moving beyond the App Store, Apple could build a $20 billion advertising business by 2026, he estimates,” according to Barron’s.

Other analysts are similarly bullish on Apple’s potential in the online ad space. For example, Bernstein analyst Toni Sacconaghi believes it could be a $7 billion to $10 billion revenue stream for Apple as soon as fiscal 2023 or the following year.

For those keeping score at home, Apple is the largest holding in both QQQ and QQQM, commanding 13.13% of each ETF’s roster.