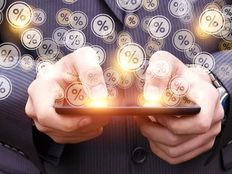 The tech sector and Nasdaq 100 have endured significant market turbulence this year, presenting an attractive opportunity for longer-term investors.

U.S. stocks fell on Monday as investors remain focused on Russia-Ukraine war developments, as well as anticipated interest-rate hike later this week by the Federal Reserve.

The simple moving average is an indicator of health for individual stocks and can be used to identify market trends and key price points. According to some investors, a healthy stock will consistently close above the 200-day moving average, according to YCharts.

However, in the current market environment, marred by turbulence, inflation, and uncertainty about rising rates and geopolitical tensions, long-term investors have the opportunity to capitalize on traditionally expensive, highly-regarded funds trading at a significant discount to their moving averages.

Since 1971, the index has hit a death cross 31 times, and in 77% of those cases, the index was higher six months afterward, according to Potomac Fund Management, as cited by Bloomberg.

While the likelihood of the Fed raising interest rates is a key concern for investors, contrary to popular belief, U.S. stocks generally did better during Fed tightening cycles than during Fed easing cycles, according to Talley Léger, senior investment strategist at Invesco

More downside and volatility is expected as Russia’s invasion of Ukraine came as an enormous surprise to markets, as reflected in the stock market sell-off as well as some of the speculative activity in commodity prices; however, analysts predict that markets will start to recover as the global economy adjusts expectations and digests such a dramatic departure from conventional expectations, according to Invesco.