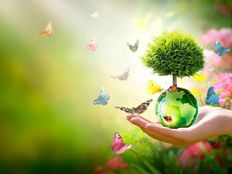 Oil prices were soaring amid Russia’s invasion of Ukraine, but that war is exacerbating pain at the pump. It’s also acting as a reminder that energy security is a crucial piece in broader national security plans for any country.

With plenty of experts arguing that renewable energy fits into energy security, it’s not surprising that investors are revisiting the related exchange traded funds, including the Invesco WilderHill Clean Energy ETF (PBW B) and the Invesco Solar ETF (TAN C+).

Last month, investors allocated $642 million to a batch of well-known renewable energy ETFs, with PBW and TAN combining for about $400 million of that total.

“The activity doesn’t match squarely with broad activity across exchange-traded funds, pointing to Russia’s invasion of Ukraine as a catalyst for renewed interest in the space,” reports Pippa Stevens for CNBC. “Funds that track the S&P 500 attracted around $6.9 billion in inflows during March. Capital also flowed into these funds in February and December, at the same time that investors were exiting renewable energy funds.”

While renewable energy and fossil fuels are viewed as competing propositions, history indicates that when oil and natural gas prices soar, as is happening this year, renewable energy equities and ETFs often follow suit. The reasoning for that scenario is simple: Green energy proponents often leverage high fossil fuels as credibility for their side of the argument.

“In the face of geopolitical turmoil with Russia’s invasion of Ukraine, cleantech names have reacted positively,” according to a recent report by Needham analysts. “Solar names have benefited from rising natural gas prices and renewed focus on energy independence.”

Indeed, there’s no denying that solar stocks are rallying on the back of the Ukraine war. TAN is higher by 11.53% over the past month while the broader PBW, which focuses on more than just solar equities, is up 13.56% over the same span.

“Drilling down on what’s actually in each fund, the firm said that SolarEdge is the most popular stock across clean energy funds, with the company held in 21% of actively-managed sustainable funds,” according to CNBC. “Other popular names are First Solar and Enphase Energy, which appear in 16% and 15% of funds, respectively.”

Enphase and Solaredge are TAN’s top two holdings, combining for nearly 21.5% of that ETF’s weight. First Solar is the third-largest component in the fund at a weight of 6.56%, as of April 1, according to issuer data.