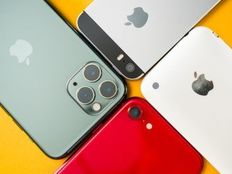 iPhone News Not a Big Deal, but Opportunity Persists

Apple (NASDAQ:AAPL) is holding another of its often-ballyhooed new product events on Wednesday, September 7, and the company is expected to unveil new versions of popular products such as the iPhone, Apple Watch, and AirPods.

Owing to Apple’s status as the largest holding in a variety of broad market and technology-specific exchange traded funds, the company’s new product reveals are often widely anticipated events in the investment community. The theory is that new Apple products can move the needle for Apple-heavy ETFs, including the Invesco QQQ Trust (QQQ B+) or the Invesco NASDAQ 100 ETF (QQQM B).

Investors ought to be careful of buying into that sentiment, but that’s not an indictment of QQQ and QQQM, both of which sport weights of 13.63% to the iPhone maker.

“Historically, Apple’s stock does not react materially to iPhone announcements (given that there are typically no surprises), and performance has generally been fairly muted in the 3-months following iPhone announcements (typically mid-September to mid-November), as investors wait to gauge the strength of the iPhone cycle,” wrote Bernstein’s Toni Sacconaghi in a note to clients published yesterday. “We expect the same this year.”

Historical data suggest that investors betting on an iPhone boost for ETFs like QQQ and QQQM need to be patient. One can materialize, but it takes some time.

“Despite the usual hype, the shares typically perform just about in-line with the market one month after the iPhone reveal, Bernstein data shows. And three months out, the shares are only slightly beating the market. It’s not until six months out when the stock typically returns to its market-beating ways,” reported Samantha Subin for CNBC.

From 2014 through 2022, it took six months following an iPhone launch for Apple shares to return an average of 6.6%. That’s similar to the stock’s returns in the six months leading up to new iPhone announcements.

“One reason for the meager post-launch performance is that the trade already occurred in the run-up to the event. Shares typically rise 13.9% percent more than the S&P 500 in the three months leading up to the launch. Over the last three months, the stock has outperformed the market by 11.5%,” according to CNBC.

Investors mulling QQQ or QQQM can indulge patience because the ETFs are loaded with quality stocks, of which Apple is one, and many of those names are trading at notably lower valuations today than they were at the end of 2020.