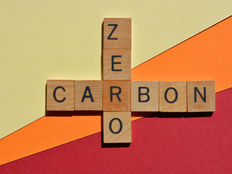 Investors continue hearing terms like “net-zero” and “carbon transition” floating around, but more than lip service is required to lift the fortunes of clean energy investments, such as the Invesco WilderHill Clean Energy ETF (PBW B).

Fortunately, it looks like stakeholders, including governments and asset managers, realize that the amount of capital required to adequately transition the world to net-zero emissions is massive. As in, $130 trillion levels of massive. PBW, one of the oldest green energy exchange traded funds, tracks the WilderHill Clean Energy Index and could potentially benefit from expenditures like that.

“Speaking on a climate finance panel at the UN COP26 meeting, (BlackRock CEO Larry) Fink was commenting on the $130 trillion in private capital commitments that the Glasgow Financial Alliance for Net-Zero (GFANZ) said it has secured to help economies transition to net zero,” according to IHS Markit. “GFANZ is a network of more than 450 banks, insurers, and asset managers across 45 countries that was formed in April by former Bank of England Governor Mark Carney and US Special Presidential Envoy for Climate John Kerry to bring all net-zero financial initiatives, including the Net Zero Asset Managers Initiative, under one umbrella.”

Home to $2.07 billion in assets under management, PBW holds 73 stocks, which is a fairly deep lineup among legacy renewable energy ETFs. That diversification is a plus against the backdrop of substantial net-zero spending. Experts agree that there will be challenges in terms of hitting the aforementioned $130 trillion target.

“The realities are that deploying that [private] capital will be harder than investing in a government bond, public equity, a treasury bond," Fink said at the climate conference.

How that spending shapes up in the coming years obviously remains to be seen. However, PBW offers investors compelling positioning because it features exposure to six sectors, with industrials, consumer discretionary, and technology combining for about 80% of the fund’s roster, according to issuer data.

While the bulk of PBW components are U.S.-based companies, some are levered to the global nature of net-zero spending, and that’s a positive because these expenditures are, in fact, global.

“With the backing of French and German investment funds as well as the Japan Bank for International Cooperation, Black Rock’s Climate Partnership Fund has been able to exceed its initial target of raising $500 billion to invest in renewables and related clean energy infrastructure,” notes IHS Markit.

PBW also has another perk: the size factor. Just 6.49% of its components are large-caps. The remainder classified as mid- and small-cap equities.