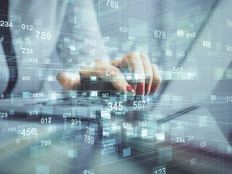 At the industry level, one of the more egregious offenders in this year’s tale of woe for growth stocks is software. Entering 2022 with a slew of frothy valuations, software has been one of the epicenters of growth stock retrenchment this year.

That’s among the factors hampering an array of exchange traded funds, including the Invesco QQQ Trust (QQQ B+) or the Invesco NASDAQ 100 ETF (QQQM B). However, some market observers see signs of hope for software equities, noting an uptick in consolidation in the space next year could be a positive catalyst for currently moribund software names.

“I do think we are going to see an increasingly active M&A market and that’s something that we are very active in,” Bofa tech banker Rick Sherlund said in an interview with CNBC on Thursday. “I think the strategics, the companies with all the cash, would like to see more capitulation in valuation thinking by the private companies.”

Should that prediction prove accurate, QQQ and QQQM make for predictable beneficiaries. Both Invesco ETFs track the Nasdaq-100 Index (NDX). The ETFs devote almost 49% of their rosters to technology stocks and that includes plenty of software names.

The funds are home to some software titans, such as Microsoft (NASDAQ: MSFT) and Adobe (NASDAQ: ADBE). That’s confirmation that QQQ and QQQM are homes to plenty of credible potential buyers in software consolidation, but despite the large/mega-cap purviews of the ETFs, they’re also homes to some potential targets.

“As you go into next year I would expect that you will see more capitulation on valuation expectations and the premiums that are required to make these deals happen," Sherlund added.

Integral to the software mergers and acquisitions thesis as it pertains to QQQ and QQQM is the point that the ETFs’ larger software holdings don’t necessarily need to drive more consolidation in the space because there are other credible, well-capitalized suitors with penchants for buying technology assets.

“They are very eager and actively looking at the sector,” Sherlund noted. “I think it suggests that M&A. in the absence of an IPO market, we’re just going to see a lot more consolidation coming in the sector.”

Supporting the notion that QQQ and QQQM could see some elevated software takeover activity in 2023 is the point that corporate bond markets, despite rising interest, are functioning nicely, providing would-be buyers with avenues to procure capital.

“But I think that’s been a constraint on private equity’s ability to do all the deals that they would like to do. But also, like the strategics, you needed to see greater capitulation and I think as more time goes by companies will have their valuation expectations softened and that combined with a more fully functional financial markets I think will accelerate the pace of M&A,” concluded Sherlund.