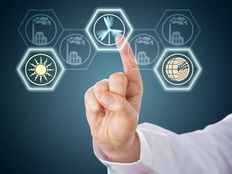 California authorities released a report last week indicating that the most populous state in the country is running on nearly 100% renewable energy this month.

That’s just one example, but it cements the notion that in the U.S., clean energy adoption and policy varies from state to state. For exchange traded funds such as the Invesco WilderHill Clean Energy ETF (PBW B), that’s a potential long-term positive.

“Many US states are positioning for growth of a green economy in the absence of definitive guidelines from the federal government, as the US transitions to carbon-free electricity by 2035 and net carbon neutrality by 2050,” says Fitch Ratings.

PBW, which follows the WilderHill Clean Energy Index, is potentially an ideal play on state-level adoption of renewable energy because various states embrace different clean technologies. For example, solar is prevalent in California, while some states in the Northeast are big users of wind energy.

PBW holds 80 stocks, which are spread across the green energy equity landscape, ensuring that investors get a diverse portfolio in a fast-growing segment of the market. Plus, the ETF is levered to other clean technology themes.

“California, Rhode Island and Washington are at the forefront of legislation to expand EV charging station accessibility,” adds Fitch.

Multiple PBW holdings have exposure to the electric vehicle ecosystem, and that is accomplished with just a 1.35% weight to Tesla (NASDAQ:TSLA), suggesting that PBW isn’t overallocated to a single EV name. The Infrastructure Investment and Jobs Act (IIJA) provides nearly $1 billion in funding for EV charging stations in Texas, California, and Florida alone.

“Many clean energy strategies are ensuring that ‘just transition’ considerations are factored into state plans by requiring disadvantaged communities or workforces particularly affected by the energy transition to have access to education and career opportunities in this growing sector,” notes Fitch.

PBW’s diverse approach to renewable energy is further enhanced by the fact that it doesn’t allocate more than 1.65% of its weight to any of its holdings, indicating that single-stock risk is limited in the fund. Additionally, as its Tesla weight suggests, PBW isn’t dependent on large-cap stocks. In fact, large-caps represent just 5.67% of the fund’s weight. On the other hand, small-cap blend, growth, and value stocks combine for over two-thirds of the ETF’s roster.