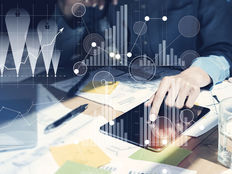 A simple explanation regarding the long-running out-performance of domestic stocks relative to international equities is technology. As in, the U.S. features more exposure to that sector than many standard international equity benchmarks, and that has contributed to success.

The S&P 500 allocates almost 29% of its weight to tech stocks compared to just 9.56% in the MSCI EAFE Index and 22.37% in the MSCI Emerging Markets Index. Technology’s leadership is a boon for tech-heavy exchange traded funds, including the Invesco QQQ Trust (QQQ B+) and the Invesco NASDAQ 100 ETF (QQQM B).

“The American success came from technology stocks. As with the overall U.S. marketplace, technology surged in the 1990s, then retreated, then rebounded after the 2008 global financial crisis. That the parties moved together was no accident,” writes Morningstar’s John Rekenthaler. “During the period, technology was the largest U.S. investment sector. It was also the best-returning industry, gaining 10.5% annually in real terms. Without its technology gains, the U.S. stock market would once more have been middling.”

As advisors and experienced investors well know, QQQ and, more recently, the lower-cost QQQM are the ETFs to consider for upping technology exposure while still maintaining something of a broad market feel. Both Invesco ETFs track the Nasdaq-100 Index (NDX), which currently allocates over half its weight to tech stocks.

Of course, some experts and market observers are reluctant to attribute all or most of the long-running out-performance of domestic equities to tech.

“Proponents of American exceptionalism offer several arguments for, in their view, the country’s economic superiority,” notes Rekenthaler. “Among them are the nation’s business policies, entrepreneurial spirit, university system, support of free speech, and openness to new ideas. Perhaps those claims are correct; to adjudge them would require far more space than is occupied by this column. To the extent that these virtues exist, though, they do not seem to benefit other U.S. industries.”

As Rekenthaler notes, bets on ongoing superiority of U.S. equities amount to wagers on the technology sector. If that’s the road investors are going to travel, they’d be well-served with QQQ or QQQM. QQQM is intended for long-term investors, as it charges just 0.15% per year, or five basis points less than the older QQQ.