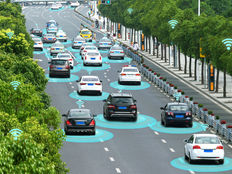 The Evolution of Driverless Automobile Tech Could Boost These ETFs

Highways and roads filled with driverless automobiles are still some time away, but technology is evolving at a rapid pace and next year is expected to bring more of the same.

Of course, there are investment implications, and the good news for investors is that a variety of companies are involved in autonomous technology and stand to benefit from its evolution. That could be a sign that exchange traded funds, such as the Invesco QQQ Trust (QQQ B)+ and the Invesco NASDAQ 100 ETF (QQQM B), are worthy considerations for market participants that don’t want to stock pick or rely on thematic for driverless tech exposure.

QQQ and QQQM, both of which follow the Nasdaq-100 Index (NDX), are worthy of examination on the driverless tech front because NDX is home to multiple companies with exposure to this burgeoning field. Bank of America’s Justin Post said in a recent report that the industry-level implications for driverless tech are vast and include 5G, artificial intelligence, and big data, among others. QQQ and QQQM feature exposure to all of those themes. However, some patience will be required.

Bank of America “said it expects 2.2 million autonomous vehicles to be on the roads by 2028, citing research by consultancy firm Berg Insights. In November, UBS estimated that China’s autonomous driving-related market could reach $100 billion by 2030,” reports Zavier Ong for CNBC.

Google parent Alphabet (NASDAQ:GOOG), which represents about 7.6% of the QQQ and QQQM rosters, controls Waymo, which is a major supplier of AV technology essential to autonomous vehicles. Amazon (NASDAQ:AMZN), another marquee holding in the Invesco ETFs, is seen as a potentially significant adopter of driverless truck tech in the years ahead.

“Bank of America estimates that Amazon could enjoy up to $4.5 billion in cost savings if it used autonomous vehicles for delivery now, and more could be saved as volumes grow. The bank has a price target of $137 on Amazon, which represents a 53.9% potential upside to its closing price on Dec. 9,” according to CNBC.

The bank also highlights a familiar theme in terms of corporate adoption of autonomous vehicles: Driving costs of those vehicles down to the point that companies realize material costs savings relative to internal combustion engine vehicles. That’s similar to the road traveled by electric vehicle manufacturers; cost parity is essential to increased sales and long-term investment cases.