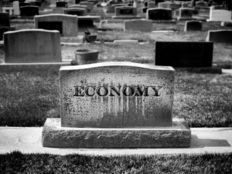 Profiting from the overreaction of others is fundamental to the contrarian investment philosophy. One of the more popular strategies that embraces the contrarian approach is crisis investing. This article dives deeper into the topic, examining crisis investing in greater detail and highlighting its appeal and drawbacks.

What Is Crisis Investing?

Crisis investing refers to the notion of profiting from investor panic following an exogenous event. What this means is mustering up the courage and conviction to buy (or sell) certain assets while the rest of the market is running away from those very same securities, fearing that the worst is yet to come.

What constitutes a crisis? Any event with negative social and/or environmental repercussions that is damaging enough to inspire panic selling in the market (or is perceived to be such). Real life examples of a crisis aren’t terribly difficult to come by in history, be it a terrorist attack, escalating military conflict, or a natural disaster.

Simply put, crisis investing is the epitome of the well-known Wall Street bit of wisdom reminding us to “be greedy when others are fearful, and fearful when others are greedy.”

Why Buy After Panic Selling?

The appeal of crisis investing is no different than that of any other contrarian-based strategy, and that is, to generate outsized returns at the expense of other investors’ biases. Now to answer the above heading, why buy after panic selling? Because markets will typically sell off more than is warranted following a crisis, thereby creating a lucrative buying opportunity to profit from the inevitable rebound in prices.

The notion that investors tend to overreact to crises of all sorts is rooted in historical evidence.

Consider the following research taken from the classic Contrarian Investment Strategies: The Next Generation by David Dreman; the table below showcases the performance of the Dow Jones Industrial Average through 11 major postwar crises spanning 1948 through 1990.

The key takeaway here is simple: buying and holding stocks in the first two years after a major crisis would have yielded handsome returns for investors.

More recent research from Keith Fitz-Gerald suggests a similar theme, despite the vast difference in time periods that is considered; the table below showcases the returns of local stock market indexes following major terrorist attacks:

The takeaway here is again that positive returns typically follow in the months after a crisis has wreaked fear across the market.

The ultimate appeal of crisis investing lies in the potential to take advantage of panic in the market. After all, a crisis is merely a buying opportunity in disguise when you consider the upward-sloping trajectory of the stock market over the long haul.

Crisis investing undeniably falls into the bucket of things that are easier said than done. Why? There are three key factors that make crisis investing inherently difficult to attempt, let alone master:

In light of these inherent difficulties, it shouldn’t come as a surprise that crisis investing is a strategy which very few can truly pull off.

Learn more about How to Battle Your Own Investing Biases.

His reasoning behind this is simple: no matter how cheap, or oversold, a group of stocks looks, you never know for sure that you aren’t buying a clunker. Put another way, you’re better off buying a basket of similar securities in lieu of chasing after the one or two that you think might deliver the best returns.

The proliferation of exchange-traded funds makes following this rule – that is, diversifying extensively – much easier than ever before. For example, instead of struggling to “cherry pick” defense stocks following an escalation of a geopolitical conflict, investors can now gain exposure to this entire segment through the purchase of a single ticker, like the iShares U.S. Aerospace & Defense ETF (ITA B+).

By definition, crises emerge and intensify without warning, leaving investors with little to no time for rational decision making, which is why most succumb to panic selling. Furthermore, because every crisis is different and there are no clear-cut rules when it comes to buying or selling, most investors will have a hard time being consistently profitable following this approach. For those that want to try and profit from the next crisis, be sure you have strict risk controls in place along with a well-defined exit plan.