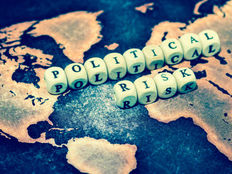 How to Avoid These 3 “Political Risk” Trading Mistakes

We all hear about political risk, but what exactly does it mean for investors and how should you best deal with it.

What is Political Risk?

The anticipation of political risk among investors is enough to push volatility higher, which often spurs sector rotation and/or a flight to defensive assets (see ways to play below). As exciting as it may be to get caught up in political events, most of these developments are just noise and should be ignored by the majority of long-term investors.

Below are three tips to remember the next time election noise and political chatter from the media start to cloud your judgment.

Perhaps the most dangerous thing about political risk is the fact it can cloud your judgment and lead you to make damaging decisions with your investments. Your asset allocation plan should come first, but too many investors get caught up in the thrill of politics. This leads them to abandon their asset allocation plans and make emotionally influenced decisions instead.

Remember that political risk in itself bears no harm to your investments, unless you act and make an ill-timed transaction. Put another way, don’t let election polls sway you away from your asset allocation plan.

2. Avoid Placing Any Bets in Your Portfolio Before the Election.

Leave it to the traders to speculate on which sectors and industries may or may not benefit depending on which party wins the vote. While it may be tempting to pick securities that could benefit in anticipation of a certain party winning, it is not a worthwhile endeavor given the major market-timing risk associated with such a strategy.

Not only is it foolish to make asset allocation decisions based on who might win, it’s even more foolish to assume that candidates will actually follow through and implement their proposed policies.

The lesson here is don’t be quick to change your asset allocation plan because of hypotheticals.

Attempting to hedge against every risk, especially around political-related developments, is a surefire way to slowly bleed your account. Why? Because you’re probably late; you’ll pay a high cost; and, you’ll have to pick the right instrument to hedge with, on top of it all.

If you’re a long-term investor then behave like one, and don’t be swayed by seasonal politics-related blips in the market, such as elections.

If you feel the need to hedge during times of rising volatility due to political storm cloud gathering, then you ought to consider the following list of go-to safe-haven assets:

If you’re a seasoned trader, then political risk events are littered with intraday and swing trading opportunities. While some may find election season or geopolitical events optimal times to make tactical allocations, most passive investors are likely best served being hands-off during times of heightened uncertainty.