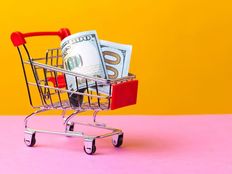 Consumers of all stripes are feeling the pinch of inflation, but some analysts believe affluent consumers are prepared to deal with high prices and some are likely to continue spending.

Not all consumer discretionary funds are adequately levered to the theme of spending resilience among high-end consumers. One that has that exposure is the Goldman Sachs Future Consumer Equity ETF (GBUY). To be clear, GBUY isn’t a dedicated consumer cyclical exchange traded fund. In fact, that’s merely the ETF’s second-largest sector allocation at 25%.

Still, owing to active management, GBUY can be more judicious in its consumer discretionary allocations and can move more nimbly than index-constrained competitors to capitalize on important consumer trends.

“While the initial consumer spending surge was driven by the reopening theme, we expect another theme to emerge driven by higher income household spending relative to lower income” households,” said UBS analysts in a recent report. “This should support premium/luxury vs value brands too as more consumption moves up the quality scale.”

GBUY has some reopening exposure, but that’s mostly defrayed by a 31.4% allocation to communication services stocks, and while that sector is sagging this year, GBUY’s biggest bets on that sector are mega-cap names with quality attributes.

Focusing on the ETF’s consumer discretionary holdings, several of its components are tethered to the affluent consumer. That group includes Nike (NYSE:NKE), a member of the Dow Jones Industrial Average.

“Nike has the pricing power to pass on higher costs to consumers. The sportswear brand faces challenges from Covid lockdowns in China, but Stifel analysts still reiterated the stock as a buy earlier this month,” reported Sarah Min for CNBC.

Another consumer cyclical name highlighted by CNBC that has exposure to wealthier consumer purchasing trends is Ulta Beauty (NASDAQ:ULTA), which, like Nike, is a top 10 holding in GBUY.

Though not mentioned in the CNBC post, LVMH Moet Hennessy Louis Vuitton SE is the epitome of a stock with affluent consumer exposure. The French luxury goods giant owns 75 brands ranging from Celine to Fendi to Louis Vuitton to Emilio Pucci to Marc Jacobs as well as an extensive portfolio of high-end liquor and wine companies, among other holdings.

In addition to apparel and wine and spirits, LVMH is a luxury leader in cosmetics and fragrances as well as jewelry and watches. The stock is the fifth-largest holding in GBUY at a weight of 5%.