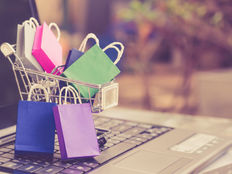 E-Commerce Has the Deals

Consumers often equate deals with good prices and bargains on particular items, but investors targeting e-commerce stocks and exchange traded funds in 2022 should think of deals in different terms.

Deal-making, that is. Some experts believe that online retail could be a hotbed of mergers and acquisitions activity. If that prediction proves accurate, it could carry with it favorable implications for ETFs such as the Goldman Sachs Future Consumer Equity ETF (GBUY C).

“Amazon.com Inc. and other U.S. e-commerce retailers are likely to pursue deals in 2022 that will further bolster their digital and technology capabilities, a move experts say will help them tighten their grasp on higher levels of online sales in the new year,” notes S&P Global Market Intelligence.

GBUY, which debuted in November, allocates 6.8% of its weight to shares of Amazon (NASDAQ:AMZN), and the stock is the rookie ETF’s largest holding. From a consolidation perspective, that’s relevant because Amazon doesn’t shy away from big deals, and it has the firepower to execute such transactions.

“One of the biggest deals that could advance next year is Amazon’s planned $10.56 billion acquisition of film and television company MGM Holdings Inc. It would mark the company’s second-largest acquisition behind Amazon’s 2017 purchase of Whole Foods Market Inc. for $14.62 billion,” adds S&P Global.

Other big name retailers such as Target (NYSE:TGT) and Walmart (NYSE:WMT) could be players on the 2022 e-commerce consolidation stage.

“Arun Sundaram, senior equity research analyst with CFRA, said Walmart may also look to invest in systems that will allow it to standardize its technology across distribution centers and stores,” notes S&P Global.

While those two retail giants aren’t holdings in GBUY, their searches for scale could lead to partnerships with some smaller GBUY holdings.

About 61% of the fund’s holdings dwell in the communication services and consumer discretionary sectors, and the bulk of the GBUY lineup is classified as large-cap growth fare. With a significant concentration in large- and mega-cap stocks, the GBUY portfolio is likely comprised of more buyers than sellers in online retail consolidation.

Still, that could reward investors, as GBUY components have significant wide moat coverage and average long-term earnings growth of almost 23%, according to Morningstar data. GBUY offers the advantage of being actively managed, indicating that it can deliver to investors a more responsive basket of e-commerce equities.