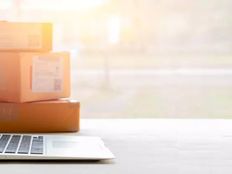 Confirming that rising interest rates and high inflation are a toxic brew for consumers, the consumer discretionary sector is one of the worst-performing groups in the S&P 500 this year.

Down almost 25% year-to-date, Amazon (NASDAQ:AMZN) — the largest consumer cyclical stock — is a poster child for the sector’s woes. Against that backdrop, it’d be easy for investors to gloss over exchange traded funds such as the Goldman Sachs Future Consumer Equity ETF (GBUY C), but they might want to rethink that strategy.

Indeed, Amazon is the second-largest component in GBUY at a weight of 6.8%, but the fund is more comprehensive than meets the eye. Plus, e-commerce is still growing.

In the first quarter, domestic e-commerce sales rose 2.4% on a quarter-over-quarter basis to $250 billion, according to the Commerce Department.

Among ETFs with ties to the e-commerce theme, GBUY is one of the more relevant — a status obtained via multiple avenues. First, the Goldman Sachs ETF isn’t solely dependent on stocks like Amazon. In fact, of GBUY’s top 10 holdings, just three are direct online retailers. Others are tech, payments, and infrastructure plays, showing that the fund has depth.

Second, GBUY taps into the theme of e-commerce being an international phenomenon. U.S. stocks represent 57.7% of the fund’s roster, which is on the lower end of the category average. A potential source of long-term allure is GBUY’s almost 19% allocation to Asia ex-Japan equities. That’s a region ripe with long-term e-commerce potential owing to rising middle classes and significant room for increased internet adoption.

And yes, as the Census Bureau survey indicates, there’s still room for e-commerce growth in the U.S. That trajectory could resume as consumers get some relief at the pump and in terms of food prices.