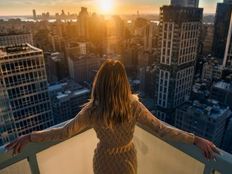 With the consumer discretionary sector ranking as one of the worst-performing groups in the S&P 500 this year and consumer confidence being pinched by high inflation, among other macroeconomic factors, it is easy for investors to discard consumer cyclical stocks and the related exchange traded funds.

One of those ETFs is the Goldman Sachs Future Consumer Equity ETF (GBUY C). However, relative to its old guard rivals, GBUY has some aces up its sleeve that could make it a more appealing avenue for consumer discretionary exposure.

Notably, GBUY has robust exposure to companies that count high-end consumers among their most important client bases. Additionally, GBUY is actively managed so the ETF’s managers can potentially boost allocations to such firms.

“The term luxury summons a variety of ideas to mind. The range spans from caviar to corvettes, and gin to jewelry. While luxury products are varied, the brands behind them are well-known and etched into our cultural memory,” according to S&P Dow Jones Indices. "Brands like Gucci, Luis Vuitton and Porsche are nearly a century old. The luxury segment’s durability is echoed in its revenues that grew by 6% CAGR according to some estimates during the 1996-2018 period, highlighting the positive impact of globalization on luxury markets from the opening of the Asian economies.”

Regarding LVMH Moet Hennessy Louis Vuitton SE, the French fashion house and spirits giant is GBUY’s fourth-largest holding at a weight of 4%, according to Goldman Sachs Asset Management (GSAM) data.

The points about breadth throughout the luxury goods ecosystem, revenue stream diversity, and durability in trying times, which are noted by S&P Dow Jones, are relevant to GBUY. Some luxury goods makers and retailers, including some GBUY components, proved resilient during the coronavirus pandemic.

In addition to Louis Vuitton, other luxury goods makers and retailers in the GBUY portfolio include Ulta Beauty (NASDAQ:ULTA) and Nike (NYSE:NKE), among others. Perhaps adding to the allure of GBUY is that while many of its holdings are considered growth stocks, some on the luxury goods side of the ledger are now attractively valued following broader market weakness.

“In terms of index fundamentals, while valuations (P/CF, P/S) looked relatively expensive in February-March 2021 during the height of Growth outperformance, recent market weakness has pared the ratios. In fact, the P/CF has normalized more than P/S YTD, hinting at improving cashflows at a faster clip than sales, underscoring the industry’s adaptability,” concluded S&P Dow Jones.