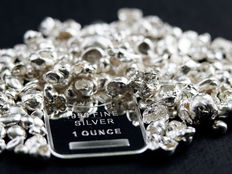 Fiat currencies are relatively new in the history of of humanity, but gold and silver have been around throughout time. Silver often gets overlooked, despite being a store of value like gold as well as an industrial metal with many uses. Here are the top ten reasons to own silver, per a brochure from Sprott Asset Management.

1. Silver is one of the world’s oldest forms of currency. If you went back 5,000 years and wanted to purchase something, then hopefully you’d have enough Mesopotamian shekel to get what you wanted. The shekel is the earliest known coin to include silver, and since then, silver has been part of currencies used by civilizations around the globe.

2. Silver is a natural entry point for newcomers to the precious metal space. Known as “the people’s money,” silver is less expensive per ounce than other precious metals while also sharing some of the same qualities.

3. Silver has enormous demand for its industrial applications. As a substance that is simultaneously malleable and indestructible on a molecular level, silver has enormous use as a commodity. Industrial buyers scoop up roughly 50% of silver, with coins, bars, jewelry, and silverware combing for just 46% of silver’s demand.

4. Silver is key in critical environmentally friendly technologies. A sustainable future is impossible without silver. Electric vehicles use between 25 and 50 grams of silver per vehicle. Solar panels require 20 grams. Cellphones and even medicine also tap silver’s unique qualities.

5. As renewables take a greater share of silver, demand is growing. Environmentally friendly technologies are seeing tremendous demand. Photovoltaics alone count for 11.3% of silver’s total demand, up from 5.6% in 2012.

6. Silver can’t be hacked or erased by inflation. Like gold, silver is a safe haven asset that functions as a hedge against inflation due to its limited supply and broad adoption. Many people are trying to flag bitcoin as “the new gold,” but that argument has some flaws. Silver is far less volatile than any cryptocurrency, with the added benefit of being unable to be hacked by cybercriminals.

7. Silver has low correlation to other asset classes. Real estate and commodities all tend to rise and fall together. Silver’s price is driven by other factors, making it an excellent portfolio diversifier.

8. Silver is more affordable than gold. The gold/silver ratio has been the primary tool used to determine the relative value between the two precious metals. Gold is currently trading at a premium, well above the long-term average, which tends to be around 50 times the cost of silver. It is currently at 79.25, making silver a compelling buy.

10. Silver is a natural complement to gold. Because gold and silver have similar investment qualities, adding silver alongside your gold could help boost returns. During precious metal bull markets, silver tends to outperform gold by 2.1x on average.

Investors interested in silver can invest in the Sprott Physical Silver Trust (PSLV ).