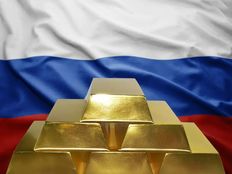 A bipartisan group of senators has proposed legislation to freeze Russia’s gold reserves. In theory, the move closes a loophole in the current sanctions and prevents Russia from selling its $132 billion in gold reserves. Russia’s reserves are the fifth-largest sovereign gold reserves in the world, according to the IMF.

The bill was introduced by Senators Angus King (I-Maine), John Cornyn (R-Texas), Bill Hagerty (R-Tennessee), and Maggie Hassan (D-New Hampshire). Current plans are to include the legislation in the spending bill that lawmakers hope to pass by the end of the week, according to Axios.

“The free world’s sanctions are devastating Russia’s economy — and as long as Putin continues his unprovoked and horrific invasion of Ukraine, we must keep up the pressure,” Senator King said in a statement introducing the legislation. “Russia’s massive gold supply is one of the few remaining assets that Putin can use to keep his country’s economy from falling even further.”

The Stop Russian Government and Oligarchs from Limiting Democracy Act would apply sanctions to American entities that intentionally transact through gold from Russia’s central bank. “By sanctioning these reserves, we can further isolate Russia from the world’s economy and increase the difficulty of Putin’s increasingly-costly military campaign,” King said.

Gold prices have surged since Russia invaded Ukraine, and Rick Rule, director of Sprott U.S. Holdings, thinks that gold prices could double or even triple in five years’ time. “I think Putin probably believes that his hand was forced into that circumstance, and I think that he has been surprised by the lack of conventional capabilities enjoyed by the Russian forces. I think too that Mr. Putin, as a politician, didn’t understand enough about the Russian economy to understand the real pain and the fact that he will, sooner rather than later, be unable to afford this war,” Rule said. “I’m reminded of less combatants, which is to say Eritrea and Ethiopia…their war 15 or 20 years ago ended because neither side could pay the gasoline bill. They literally ran out of fuel.”