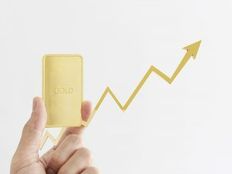 The heat is on this week as the Federal Reserve is expected to deliver another rate hike, with many experts anticipate it coming in at 75 bps. Additionally, earnings reports will be coming in from companies such as Apple, Microsoft, and Alphabet.

“Next week, I think, is going to be the most important week of the summer between the economic reports coming out, with respect to GDP, the employment cost index and the Fed meeting — and the 175 S&P 500 companies reporting earnings,” said Leo Grohowski, chief investment officer at BNY Mellon Wealth Management.

As gold struggles to gain purchase, it is important to highlight some pernicious myths about the yellow metal. There is a dominant notion that interest rate hikes make higher-yielding investments like bonds and money market funds more compelling, which weakens gold. The reality is that there is little correlation between interest rates and gold prices.

Gold prices rose throughout the 1970s even though interest rates were also moving higher. Meanwhile, the 1980s featured declining interest rates happening concurrently to a gold bear market. Between 2004 and 2006, interest rates increased to 5% and gold managed an impressive run where it went up 49%.

Earnings season has been less depressing than feared so far, and gold is likely to be in for a bit of a short-term bumpy ride given the prevalence of the myths around its performance in rising rate environments. Additionally, gold has headwinds from a strong dollar. UBS has gone as far as downgrading its gold forecast.

Despite some short-term challenges both real and imagined, the general state of the economy is one of peril. Inflation is looking unlikely to go away anytime soon, volatility is reigning supreme, and nobody really knows how deep and how wide a recession might hit. Gold exposure could provide an excellent security blanket for portfolios. Despite recent lackluster performance, it has done comparatively well in the rockiest first half of a year in a long time.