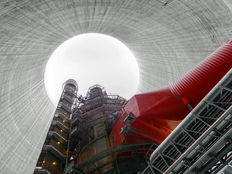 The case for nuclear power in the face of climate change is overwhelming. Nuclear power is clean, safe, and reliable. But concerns still remain. One controversy is the question of what becomes of spent nuclear fuel. Isn’t it radioactive and harmful? Sprott Insights digs into these questions in Per Jander’s latest piece.

Compared to other energy sources, nuclear power generates only a small amount of waste. “According to estimates, the total waste from a reactor supplying one person’s electricity needs for a year would be about the size of a brick. Only five grams of this is high-level waste (HLW) — the same weight as a sheet of paper,” Jander says in his report.

The radioactivity of 90% of this waste is considered “low level waste” (LLW). LLW is disposed of in strictly regulated waste areas. Of course, low level waste implies the existence of high level waste. HLW accounts for only 3% of total waste volume but generates 95% of the total radioactivity in the waste. HLW includes mostly spent nuclear fuel (SNF). But SNF isn’t nearly as dangerous or mysterious as it is made out to be.

U.S. nuclear facilities move spent fuel rods into cooling ponds located on-site. These steel-lined, concrete pools of water cool and decay the radiation levels of the spent rods to make them safer to transport or process.

Jander explains that, “Storage ponds at reactors, and those at centralized facilities such as CLAB in Sweden, are 7-12 meters deep to allow the racked fuel assemblies to be covered by several meters of water. The fuel assemblies are typically about four meters long standing on end. The multiple racks are made of metal with neutron absorbers incorporated in them. The circulating water both shields and cools the fuel. These pools are robust constructions made of thick reinforced concrete with steel liners. Ponds at reactors may be designed to hold all the used fuel for the life of the reactor, but usually the design assumes some removal of cooled fuel for reprocessing or to dry storage.”

After spending a year or more in these ponds, spent fuel rods can then go into dry storage casks. One long-term solution on the table is to bury cask-embedded spent fuel in deep geological repositories like the one currently in construction in Finland.

SNF is often thought of as dangerous, but the reality is that accidents have been rare in nuclear energy’s history. Of course, the few that have occurred have been rather high-profile. It’s worth noting that following the 2011 earthquake and subsequent tsunami in Fukushima, spent fuel storied in cooling ponds did not leak or contaminate the environment, nor did it harm workers or locals.

After hearing all of this, some folks might still find cause for alarm. But, as Jander points out, “Small amounts of radiation are part of the natural world and do not present a threat to humans. Sunshine generates much of the radiation in day-to-day exposure and some building materials, including the bricks in our houses and decorative rocks in fireplaces, can contain low levels of radiation.” In fact, nuclear power plants generate less radiation than their fossil fuel counterparts. Additionally, SNF is significantly more limited in volume and cost when compared to the waste created by fossil fuels.

Nuclear power has had a branding problem in the past, but the science is clear — it may be the only clean fuel source that can currently meet the needs of the electrical grid as we pivot to clean energy in the face of catastrophic climate change. Investors who want to be part of the growing uranium bull market can find exposure to physical uranium through the Sprott Physical Uranium Trust.