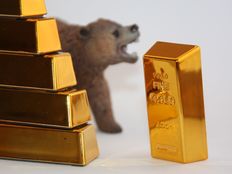 Exit to Gold and Pursued By Bear Market

Despite gold falling through its initial support level of $1,850 an ounce yesterday, the precious metal may prove to be a good hiding place as the market bloodbath continues, according some experts.

“The big headwind had been the strong U.S. dollar. When you consider that, I think gold has actually been performing reasonably well,” Steve Land, vice president and portfolio manager at Franklin Templeton, told Kitco. “Gold’s role in times of crisis and uncertainty is to maintain and preserve value, which it is doing.”

Gold has held up reasonably well even as other assets that were being touted as inflation hedges have crumbled. Most notably of these, bitcoin, which some have referred to as “digital gold,” and other digital currencies have completely collapsed — a mere three months after being advertised at the Super Bowl. Bitcoin fell below $26,000 after stablecoins such as TerraUSD imploded. Stablecoins were supposed to be the least volatile corner of the crypto market, but their recent plunge has sent investors scrambling.

Fortunately, gold remains a reliable safe haven. “There’s no question that there are a lot more moving pieces in the global economy than there have been in a long time. Gold’s, low correlation to markets, means it’s someplace investors can hideout to a degree,” Land noted, pointing out that gold continues to perform well despite a strong U.S. dollar.

Explosive inflation combined with lagging income has reduced consumer purchasing power, a situation which has historically led to attractive environments for gold. "It’s good that we’re finally having an honest conversation about what inflation looks like. The real struggle is that a lot of the inflationary pressures are structural; they are less related to the economy and more related to supply chain bottlenecks,” Land said.